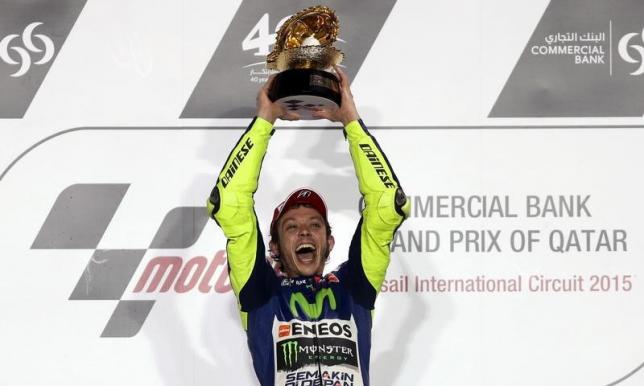 DOHA - MotoGP great Valentino Rossi rolled back the years to win the Qatar season-opener for Yamaha on Sunday with Italian riders sweeping the podium places after a thrilling duel under the Losail floodlights. Andrea Dovizioso, who had started on pole position while Rossi was only eighth, took second place just 0.174 seconds behind for Ducati with team mate Andrea Iannone finishing third. Honda's double world champion Marc Marquez was fifth after being forced out at the first corner and having to fight back from last. The win, at the grand old age of 36, was the 109th of Rossi's grand prix career and 83rd in the top category of motorcycling. "I said this a lot of times, but for me this is one of the best," said Rossi, a nine-times world champion, after a race that saw the lead constantly change hands with the outcome uncertain right to the end. Dovizioso led at the start but Rossi's Spanish team mate and double world champion Jorge Lorenzo hit the front on lap two as the race turned into a Yamaha v Ducati battle with the Honda riders eclipsed. Rossi seemed content to hang back in fourth but moved up to third at the halfway point and then used all his experience to attack, taking the lead for the first time with four laps remaining. "That's Valentino Rossi at his best," Yamaha team principal Lin Jarvis told BT Sport television. "A sensational comeback from eighth place at the beginning...he did incredibly well." Ducati have not won in MotoGP since 2010 but are in the 'open' category which confers certain advantages including tires and fuel until they start making regular appearances on the podium. It looked like their long wait was coming to an end, with Dovizioso right on Lorenzo's tail and then chasing Rossi all the way but it was not to be. "On the last lap I pushed really hard but I didn't have any more grip on the edge and it was impossible to try to attack Valentino," said Dovizioso. "Anyway, second position in the first race is really good." Marquez, winner in Qatar last year, was forced wide into the first corner and despite a thrilling comeback could make little inroads on the top four. The Spaniard could at least hold his head high after overtaking Honda team mate Dani Pedrosa for fifth place with 11 laps remaining. - Reuters