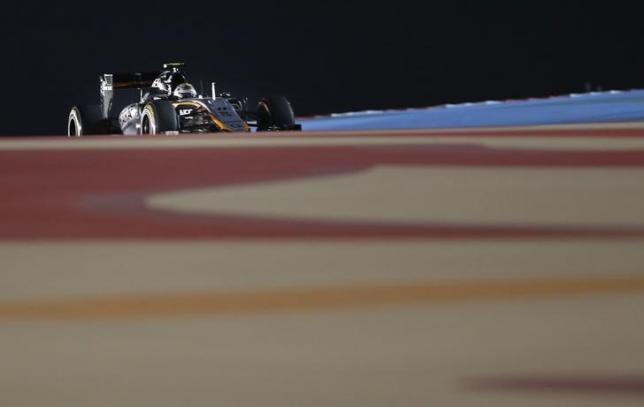 MANAMA - Formula One world champion Lewis Hamilton won the Bahrain Grand Prix for the second year in a row on Sunday with Ferrari's Kimi Raikkonen back on the podium to deny Mercedes another one-two finish under the floodlights. The Briton's flying pole-to-flag victory at the desert track was his third win in four races this season and 36th of his career. He increased his lead over Rosberg in the standings to 27 points. The Briton now has 93 points to the German's 66. Unlike last season, when he beat team mate Nico Rosberg from second place on the grid in a wheel-to-wheel battle, Hamilton was untroubled by the German who finished third after fighting the Ferraris. Rosberg was holding second place until two laps from the end when he lost his brakes, went wide and gave Raikkonen the chance to speed past on his fresher soft tyres and pull away to the chequered flag. Rosberg had been passed by Raikkonen at the start, regaining the place four laps later, in the first move of a prolonged struggle with the Ferraris. The second place was the Finn's first appearance on the podium since 2013, when he was at Lotus, and first for Ferrari since 2009. "I am gunning for it," Hamilton told triple world champion Jackie Stewart, doing the podium interviews, when reminded that he could also be a three times champion by the end of the season. "The Ferraris gave us a real good run for our money, and out there it was really difficult to look after the tyres in these conditions," he added. "Fortunately I was able to keep the car together, keep the tyres as healthy as possible and got it through... I think we showed that Mercedes are still the best." Finland's Valtteri Bottas finished fourth for Williams with Ferrari's Sebastian Vettel fifth after starting on the front row but suffering front wing problems. Australian Daniel Ricciardo was sixth for Red Bull, with the car's Renault engine expiring in a belch of smoke just before he crossed the line, and Frenchman Romain Grosjean was seventh for Lotus. Mexican Sergio Perez finished eighth for Force India while Russian Daniil Kvyat was ninth in a Red Bull and Brazilian Felipe Massa took the final point for Williams after a problem on the grid left him starting from the pit lane. Britain's Jenson Button did not start the race at all, due to electrical problems in the Honda power unit, but Spanish team mate Fernando Alonso finished 11th. - Reuters