Motor racing: Vettel says he will not lose sleep over 'small mistake' 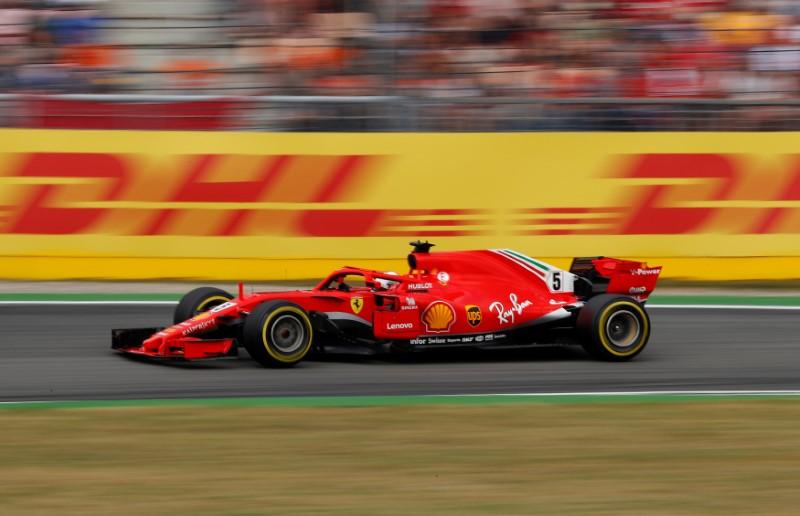 Motor racing: Vettel says he will not lose sleep over 'small mistake'

HOCKENHEIM, Germany (Reuters) - Ferrari’s Sebastian Vettel said he would still sleep soundly despite a mistake that cost him a home German Grand Prix win at Hockenheim and the Formula One championship lead on Sunday.
Formula One F1 - German Grand Prix - Hockenheimring, Hockenheim, Germany - July 22, 2018 Ferrari’s Sebastian Vettel in action during the race REUTERS/Wolfgang Rattay
The four-times world champion, who has never won at the track nearest to his home town, slid off across the gravel and into the barriers while leading on a surface made slippery by rain. Vettel pummelled the steering wheel in frustration before getting out, the German’s first retirement in a season that has so far brought him four wins.
Formula One F1 - German Grand Prix - Hockenheimring, Hockenheim, Germany - July 22, 2018 Track marshals recover the car of Ferrari’s Sebastian Vettel after he crashes out of the race REUTERS/Ralph Orlowski
Eight points clear of Mercedes’ Lewis Hamilton — the race winner from 14th on the starting grid — before the start, he ended the day 17 points adrift and he had nobody to blame but himself. “I don’t think it was a huge mistake. It was a huge impact on the race because we retired there but it’s not like tonight I’ll have difficulty falling asleep because of what I’ve done wrong,” Vettel told Sky Sports television. “I think it’s disappointing because up to that point everything was sweet, but we didn’t need the rain. “It was just one of those moments. It was my mistake so apologies to the team they did everything right. I had it in my hands — small mistake, big disappointment.” The failure only added to the pain Ferrari were already feeling with chairman Sergio Marchionne seriously ill in a Swiss hospital and relieved of his duties on Saturday. “In what was a particularly fraught weekend for the team, it would have been important for us to bring home the win and our car had shown it was up to the job,” said team principal Maurizio Arrivabene. “Unfortunately, things did not go as planned.”