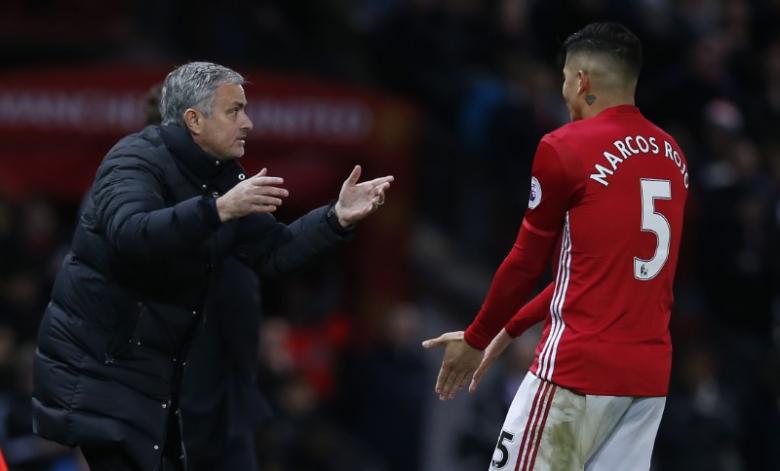 LONDON - Manchester United manager Jose Mourinho has defended Marcos Rojo, saying the defender is a "clean player", after his Crystal Palace counterpart Alan Pardew said the Argentine should have been sent off for a two-footed tackle on winger Wilfried Zaha. United's 2-1 Premier League win against Palace on Wednesday was littered with controversy and referee Craig Pawson's decision to only book Rojo for the foul, 38 minutes into the clash at Selhurst Park has divided opinion so far. "He's playing really well, phenomenal. He's a clean player, aggressive. His nature is emotional but very clean," Mourinho told British media. Rojo's ill-judged tackle came just 10 days after Everton midfielder Idrissa Gueye was on the receiving end of another horror challenge from the 26-year-old during the 1-1 draw at Goodison Park. "I didn't comment on David Luiz's challenge on Marouane Fellaini, or Danny Rose on Mkhitaryan. I'm not going to comment on this one," Mourinho said. Mourinho felt it would be clear by the end of the year whether United will be challenging for the Champions League qualification places or fighting for the league title. "Now, we are just closing the gap to the top four. Three matches to play until the end of the year," the former Real Madrid boss added. "Let's see how it ends on 31 December and we can feel then, and smell, what is possible to do in the second half of the season." United, who are on a nine-game unbeaten run in all competitions, sit sixth in the league with 27 points, three behind fifth-placed Tottenham Hotspur and 13 behind leaders Chelsea after 16 games. Mourinho's charges travel to face seventh-placed West Bromwich Albion on Saturday. -Reuters