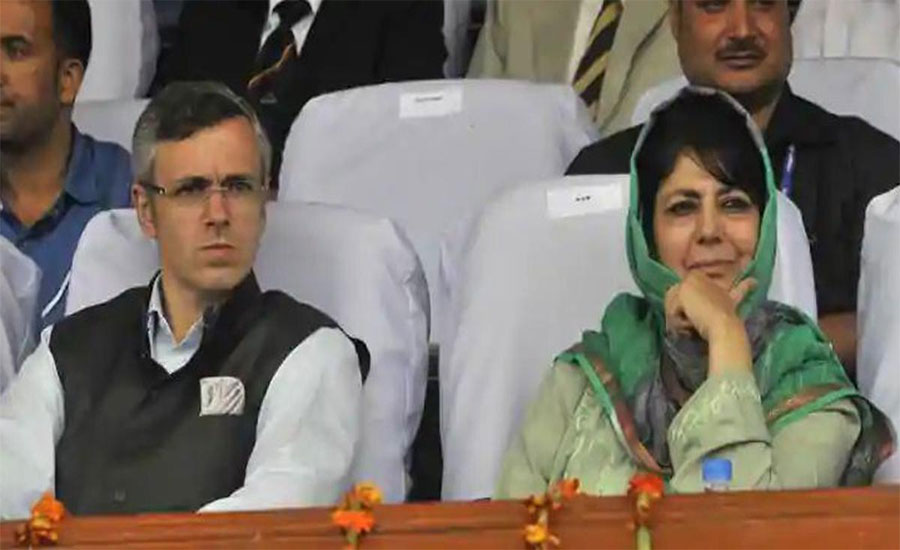 SRINAGAR (92 News) – Former Indian-held Jammu Kashmir (IHK) chief minister Mehbooba Mufti on Monday has described the step to scrap Article 370 of the Constitution as the darkest day in Indian democracy. In a statement, She termed ‘one-sided’ decision of Indian government as illegal and unconstitutional. It will bring destructive outcomes across the sub-continent. “Indian has completely failed to fulfill its promise in Occupied Kashmir,” she added. Mehbooba Mufti termed the BJP’s move to revoke Article 370 as the darkest day in Indian democracy. “Decision of J&K leadership to reject 2 nation theory in 1947 & align with India has backfired. Unilateral decision of GOI to scrap Article 370 is illegal & unconstitutional which will make India an occupation force in J&K,” Mufti wrote on Twitter.

Today marks the darkest day in Indian democracy. Decision of J&K leadership to reject 2 nation theory in 1947 & align with India has backfired. Unilateral decision of GOI to scrap Article 370 is illegal & unconstitutional which will make India an occupational force in J&K.

“It will have catastrophic consequences for the subcontinent. GOIs intentions are clear. They want the territory of J&K by terrorising it’s people. India has failed Kashmir in keeping its promises,” Mufti added. She added that the BJP wanted to change the demography of the only Muslim majority state in India and disempower Muslims to the extent where they become second class citizens in their own state. Former Chief Minister of India-held Kashmir, Omar Abdullah termed the unilateral move by the Indian government to revoke Articles 370 and 35A as a total betrayal of the trust that the Kashmiri people had reposed in India when the state acceded to it in 1947. “The decisions will have far-reaching and dangerous consequences,” Abdullah said in a statement. He added that the unilateral, illegal and unconstitutional decisions will be challenged by the National Conference. “A long and tough battle lies ahead. We are ready for that.” Earlier today, the Indian government rushed through a presidential decree to scrap a special status for Indian-held Jammu Kashmir, hours after imposing a major security clampdown in the region. Amit Shah has announced to abrogate Articles 370 and 35A from its constitution, which gives special status and rights to the people of occupied Jammu and Kashmir. A day earlier, authorities in Indian-occupied Kashmir (IoK) placed former Chief Ministers Omar Abdullah and Mehbooba Mufti and political figure Sajjad Lon under house arrest keeping in view the tense situation in the valley. The Indian government imposed curfew-like restrictions in the restive region. The examinations in all universities were postponed and internet services would remain suspended till August 15. A restriction on sale of petrol haD been imposed in Anantnag. Politicians protested against uncertain situation in the valley after all parties meeting in the valley. Farooq Abdullah speaking on the occasion said a befitting response would be given against independent identity of Kashmir. Taking to Twitter, Omar Abdullah said he was being placed under house arrest and that a similar process had already started for other leaders.