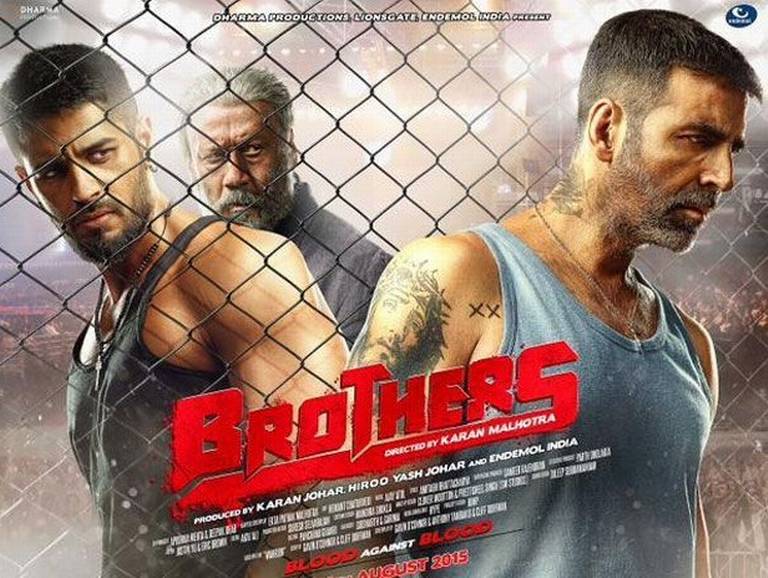 NEW DELHI - The makers of “Brothers” did the honourable thing by buying the official remake rights of Gavin O’Connor’s 2011 film “Warrior“, but they couldn’t resist adding a dash of Bollywood flavour. Director Karan Malhotra takes O’Connor’s tale of a broken family finding catharsis and redemption in a fighting pit and embellishes it with things it didn’t need – thereby ruining a perfectly good film. Stereotypes, item songs and melodrama abound in this 158-minute film, and Malhotra makes sure the compelling theme of a family torn apart by an alcoholic father is obscured by bloody fight sequences, trite dialogue and much clanging and banging passing for the background score. Monty (Sidharth Malhotra) is a tortured street fighter trying to earn his father’s approval. But his father (Jackie Shroff), a former street fighter himself, is more concerned about his estranged elder son, David (Akshay Kumar). David is a school teacher and moonlights as a street fighter to pay for his daughter’s dialysis treatment. This is a family haunted by the past and for much of the film, Shroff’s character flails about the house in an alcoholic rage. The first half of “Brothers” sets up the action for the audience, preparing them for the explosive fight between the brothers in the ring. But it is here that the director falters. The over-the-top depiction of the MMA (Mixed Martial Arts) tournament brings none of the adrenaline rush viewers would expect from a high-energy sport. The fighters are all caricatures, and the fight sequences are not well choreographed or well shot. But it is the mind-numbingly inane commentary that is the most grating part of these scenes. The verbal diarrhoea drowns out what is supposed to be the most action-packed part of the film. As a result, when the two brothers do face each other in the ring, there’s a sense of relief that the end is near. Malhotra does not sketch his characters well enough to chart their angst and later redemption, and so the denouement seems forced. The acting seems forced too. There’s too much glycerine and fake blood, and not enough real emotion. Shroff, especially, crosses all acceptable limits of hamming and is almost unbearable. There are so many unnecessary elements in “Brothers” that every time you hear the sickening crunch of a bone being broken in a fight sequence, you wish Malhotra had stuck to reproducing the original. If it ain’t broke, don’t fix it. -Reuters