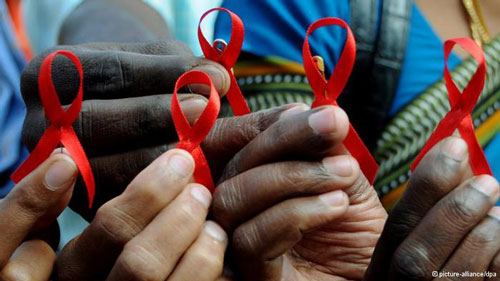 XAI XAI, Mozambique - In Mozambique's Gaza province, if someone makes it to their 35th birthday, "you rejoice", said Shady Zita, an English teacher in a rural secondary school. "You know what? To see someone reaching that age of 35, 36 now, it's not a joke," he said. Most of the funerals that he goes to are for people who are even younger, as a deadly virus that no one wants to speak about keeps picking off Mozambique's youth. "We are surrounded by people who have HIV, to be frank," said Zita, who until recently also knew very little about the province's biggest killer. But with around one in four in Gaza infected with HIV, according to the government, Zita is now taking advantage of a free and anonymous text message service to educate himself about sexual health, something that is off the regular curriculum. Since April, the UNICEF-funded 'SMS-Biz' myth-busting project aimed at 10 to 24-year-olds has been rolled out in 40 of Gaza's schools. Pupils at Shimundo secondary school, where Zita teaches, can send the most intimate questions that they can't get answers to in the dirt-track villages surrounding Xai-Xai, a provincial capital whose grand avenues speak of a former glory. Four hours south in the capital Maputo, a dozen counselors sit at their screens and copy and paste answers to commonly asked and often confused questions about HIV and malaria, sexually transmitted diseases, pregnancy and sex. They hope to reach young people like 16-year-old Frederica, who doesn't want to give her real name. She is sexually active and one of many pupils still spouting the myth that you contract HIV by using an infected person's eating utensils and kissing with tongues. She heard this first from her primary school teacher. She keeps hearing it from her mother, who is HIV-positive and still snatches the odd cup from her hands. Her mother keeps her status a secret, and Frederica has never been tested for HIV, despite her mother testing positive when pregnant with her. "I don't think I have it, because I've never done anything to get it, like eating from the same dish as someone who does," she told the Thomson Reuters Foundation. MYTHS Nationwide, around one in eight people have HIV or AIDS according to government data that is questioned by non-governmental groups working in the health sector. Gaza's officials, including the province's governor, can't provide figures for how much is being spent on fighting HIV. Without blinking, the youth ministry's director says that he thinks the average life expectancy is around 40. Mozambique has the world's eighth highest HIV prevalence. The state contributes around five percent to spending on programs, according to 2014 data - basically paying health worker salaries and allowing donors like the United States to pick up the rest. In Maputo, the team of counselors is doing its best to chip away at the myths and misconceptions that allow the virus to thrive. They can often answer over 100 messages a day, depending on their complexity and the level of myth-busting required. "People believe that if you're circumcised you can't get HIV," says 17-year-old counselor Alfabeto Chiloveque. He routinely corrects the callers by saying that it helps to reduce the risk, but they have to use condoms, only to come up against resistance to using what many boys and men perceive as a threat to their manhood. "They say that the condom is not good for the health of people, like they got HIV with the condoms ... they sell us a condom that gives us HIV when you use it," said Chiloveque. Others say: "When you have spots on your face, you have to have sex to get rid of them," he added. Counselor Flavia Meringue still gets asked if AIDS really exists, and whether you can get it from kissing or shaking hands. She used to go to schools to speak to students who wouldn't dare ask any questions. Trying to go house to house with her message would often result in empty streets and closed doors. "When parents used to see people coming in t-shirts, they used to think that we were coming to tell their children to have sex so they would hide them, so this system is better," although the numbers using the service are still small, she said. EARLY MARRIAGE Mother-to-child transmission of HIV has dropped in Mozambique due to programs testing pregnant women and giving positive women anti-retroviral treatment (ARTs) to protect children during pregnancy and breastfeeding. Men are harder to reach in places like Gaza, where the risk of HIV is fueled by widespread polygamy and migration back and forth to neighboring South Africa for work. The tradition of early marriage also puts girls at risk of infection. Despite high HIV rates and the fact that around half of Mozambican girls are married before 18, adults "don't think that this is an important to discuss," said Margarida Jeiambe, who heads the Coalizao youth organization running the counseling. "They want to make sure that they can control all the adolescent period but..they don't understand the importance of having a private space" for them to discuss sexuality, she said. Children have told the counselors via text message that youth counseling centers they are referred to in schools and clinics are being used as storerooms or were never established. While SMS-Biz is helping children who are proactive, curious and fluent in Portuguese - Mozambique's official language that sits among many local languages - its reach is limited. But for 14-year-old Wildiano Maxaieie, who looks more like 10 but is wiser than his years, SMS-Biz has been a revelation. "When I have a question, I get told the answer by people who are informed. Not everyone knows everything," he said. "I don't want to get HIV. I have too much I want to do," he said, swinging his oversized green plimsolls below his seat. –R