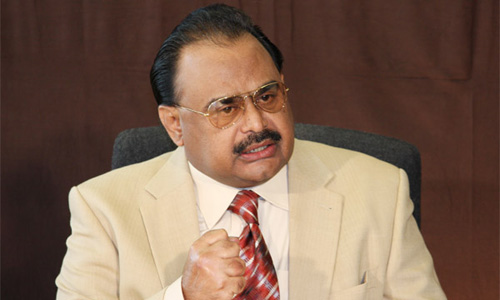 KARACHI (92 News) – Muttahida Qaumi Movement (MQM) chief Altaf Hussain has said that wanted people should have not put Nine Zero to trouble. Addressing the MQM workers on Wednesday, he said that a few people had defamed the party. “The Rabbita Committee should clearly listen that there is no room for terrorists in the MQM.” Earlier in a statement issued from London, he condemned the Rangers’ raid on Nine Zero and his sister’s house. He said that it is injustice to raid the houses adjacent to Nine Zero. He said that the house of his sister Saira Begum was raided and household articles were damaged. “My sister is suffering from multiple diseases. The Rangers will be responsible if she faced any complication and harm,” he warned. The MQM chief called for an end to terrorism in the name of the search operation. He said that the people will be informed about the allegations leveled by the Rangers. However, he asked the workers to be patient and peaceful.