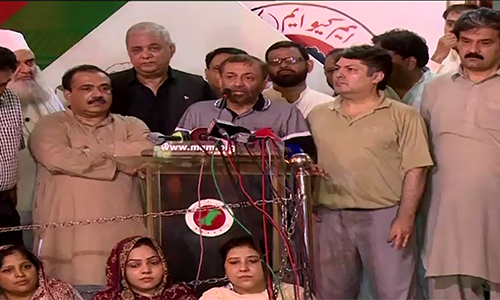 KARACHI (92 News) - The Muttahida Qaumi Movement on Wednesday resigned from the Senate and National and Sindh assemblies in protest against the Karachi operation. National Assembly Speaker Sardar Ayaz Sadiq wrote 'please process' on the resignations instead of accepting them. Sardar Ayaz Sadiq will phone Samman Sultana, the MQM MNA living in the US, to confirm her resignation. He said that the resignations had been sent to the Legal Branch, which is reviewing them. Senate Chairman Raza Rabbani said that they were fulfilling the legal requirements under Article 64 and Rule 18. Speaking on the occasion, MQM leader Farooq Sattar said that they had resigned from the three houses in protest against cruelty. "The violations of human rights are being committed in Karachi," he said. He said that space is being created for political vultures like the PTI in Karachi. Khawaja Azharul Hassan said that they had supported the PPP, considering 'hypocrisy' as 'reconciliation'. "We had come empty-handed and are returning empty-handed," he maintained.