LONDON (92 News) – London police on Wednesday informed that Muttahida Qaumi Movement (MQM) founder Altaf Hussain was released on bail on Wednesday. The Crown Prosecution Service (CPS) said the current evidence was not enough to charge Altaf Hussain at this stage. Earlier, The MQM leader had only confirmed his name, date of birth and his residential address in front of the London police. Afterwards, on the advice of his lawyer, Hussain declined to respond to the questions and chose to go for no comment option to all questions asked by the police officials.
A day earlier, Scotland Yard arrested Muttahida Qaumi Movement (MQM) founder Altaf Hussain from his house in London. 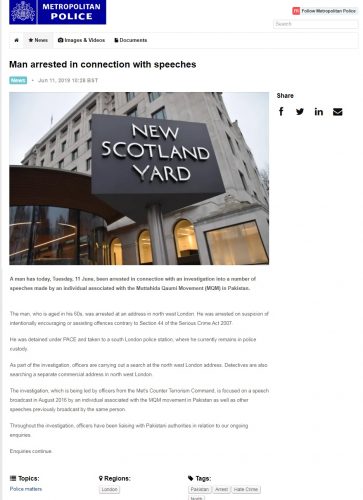 On Jan 9, Pakistan had decided to again contact the United Kingdom to take a decisive action against the MQM founder. The Interior Ministry made the decision after involvement of the MQM founder in the recent incidents during a meeting. The FIA and police officers participated in the meeting. It has been decided to all record of the cases will be sent to the UK. It is being suspected that the MQM leader is also involved in the murder of Ali Raza Abidi. The UK will be asked to either hand over the Altaf to Pakistan or take action against him.