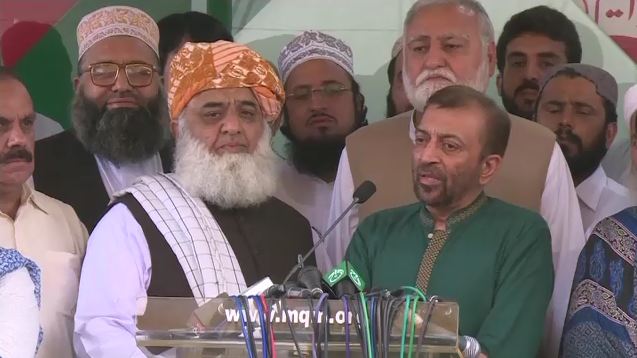 KARACHI (92 News) – The Muttahida Qaumi Movement announced on Tuesday that the dialogue with the Jamiat Ulema Islam-Fazl chief over the issue of resignation would continue in Islamabad. The agreement came when the MQM leadership and the JUI-Fazl delegation led by Moulana Fazlur Rehman met at the MQM headquarters Nine Zero, aiming to convince them to withdraw their resignations from the Parliament. Addressing the joint press conference, the JUI-F chief strongly condemned the firing incident on MQM’s Rashid Godil and he is praying for his health, adding that the dialogues on resignations would continue in Islamabad. The MQM leader Farooq Sattar said that the JUI-F chief asked them to play role while in parliament. He said that the second round of dialogues will be held in Islamabad, where government’s people will also be present. Farooq Sattar said that the attack on MQM leader Rashid could be an attempt to derail dialogues.