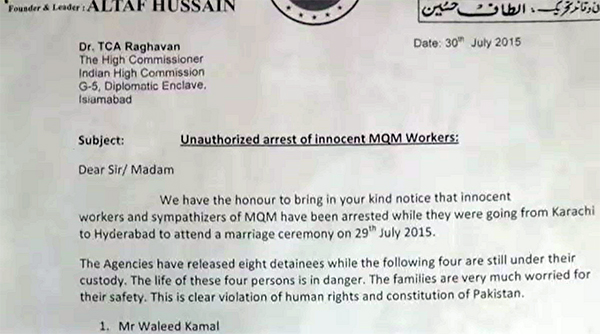 ISLAMABAD (92 News) – Muttahida Qaumi Movement in a letter to the Indian High Commissioner, appealing him to help get MQM workers released on Thursday. According to a copy of the letter written on July 30, MQM appealed to the Indian High Commissioner to take notice of the arrest of four MQM workers namely Waleed Kamal Shayan, Fahad Hashmi and Asad Raza and help get them release. The letter further said that eight of the 12 workers were later released; however, the remaining four are still in custody and claimed that they fear for their lives. The letter stated that the four arrested MQM workers were going attend a marriage ceremony in Hyderabad. Defence Minister Kh Asif said that writing of the letter is an enmity with Pakistan. MQM leader Wasim Akhtar said that if mangoes can be sent to India then why letters cannot be written. "It is a routine matter to write a letter to other countries," he said. However, Farooq Sattar has termed it a technical mistake. "We have not written a letter. Perhaps a staffer has sent an e-mail," he said.