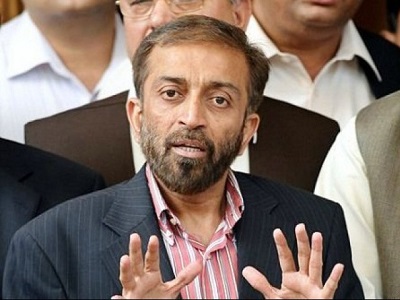 ISLAMABAD (92 News) –Farooq Sattar has said that the Muttahida Qaumi Movement (MQM) will fully cooperate with the government to wipe out terrorism in Karachi. Talking to the media after a meeting with Prime Minister Nawaz Sharif on Friday, he said that the statement of death convict Saulat Mirza was of a unique type. He said that the MQM three-member delegation had informed the prime minister about their reservations about Saulat Mirza’s statement. He added that they also discussed the situation in Karachi. The MQM leader said that they had not given refuge to anyone in Nine Zero. “No resistance was offered during the Rangers’ raid. No accused was arrested from Nine Zero,” he said. Farooq Sattar said that they had sent the licences and permits of the all weapons to the DG Rangers. He said that indiscriminate action should be taken against terrorists. He added that the raid Altaf Hussain’s house had damaged their credibility. He asked the law-enforcement agencies to help him trace 20 missing workers of the MQM. “Our 1,200 workers have been killed in target killing,” he said. Khalid Maqbool Siddiqui said that how the video of a convict after the issuance of his black warrants can be made.