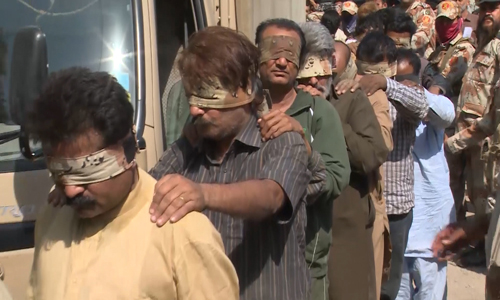 KARACHI (92 News) – Muttahida Qaumi Movement (MQM) workers Ubaid K-2 and Faisal Mota were among 9 suspects handed over to the police on Friday on 14-day physical remand. Earlier, 26 accused including Faisal Mota and Ubaid K-2 were remanded by the court in police custody for 14 days on March 13. The accused were arrested in a Rangers’ raid on MQM headquarters Nine Zero earlier this month. Meanwhile, an MQM delegation will meet Prime Minister Nawaz Sharif today to discuss the Nine Zero operation and the prevailing situation in Karachi. The delegation is expected to present their party’s reservations over the ongoing operation in Karachi.