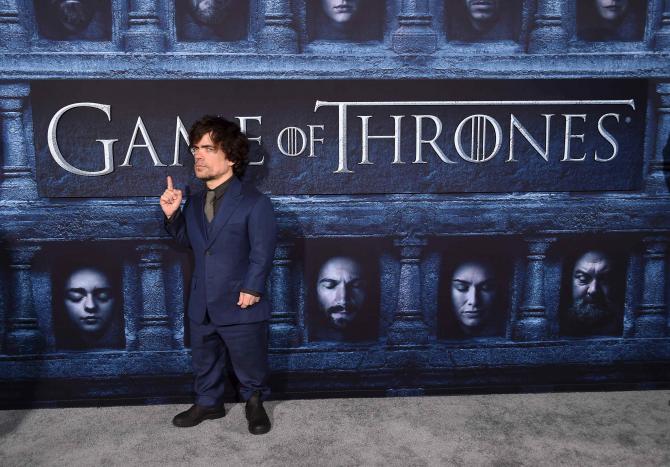 NEW YORK – A pair of Cold War Soviet spies and an awkward cyber hacker challenge the warring nobles of the Iron Throne at the Primetime Emmy Awards on Sunday, where more than 20 awards celebrating the best of television will be handed out. HBO fan favorite "Game of Thrones" is hoping to keep its best drama series crown after an acclaimed sixth season. But FX's long-ignored "The Americans," starring Keri Russell and Matthew Rhys as Soviet spies posing as ordinary Americans, or USA Network's Golden Globe-winning "Mr. Robot," with Rami Malek as a socially inept hacker, could take the top prize. "'The Americans' is probably the biggest competition for 'Game of Thrones' this year because it has been a long-time snub at the Emmys and this was the FX drama’s finest season," said James Hibberd, editor at large for Entertainment Weekly. "Games of Thrones" has a leading 23 nominations, including multiple supporting actor and actress nods. "It had a triumphant season this year with lots of iconic episodes that critics and fans adored so I can't imagine it losing while it is still riding such a creative high," said Tom O'Neil, editor of the awards prediction site Goldderby.com. The best comedy competition probably will not be as dramatic. After a fifth season that reflected the jaw-dropping nature of the 2016 U.S. presidential campaign, Washington satire "Veep" will be hard to beat. Its star, Julia Louis-Dreyfus, is expected to pick up her fifth straight acting Emmy for playing the ambitious, self-absorbed Selina Meyer. "'Veep' is an Emmy inevitability," O'Neil said. "This show was better than ever this year and it has no serious competition." However, the biggest winner could be FX's "The People v O.J. Simpson: American Crime Story." It received 22 nominations for its 10-hour dramatization of the former football star's 1995 double murder trial, which was aired against a contemporary backdrop of tense race relations. "'The People v O.J.' took what could have been an exploitative true crime docudrama and elevated it into a riveting and surprisingly topical television," Hibberd said. The show is seen as a shoo-in to take the limited series Emmy while Sarah Paulson is favorite for her role as prosecutor Marcia Clark. Courtney B. Vance (Johnnie Cochran), Cuba Gooding Jr. (O.J. Simpson), David Schwimmer (Robert Kardashian), John Travolta (Robert Shapiro) and Sterling K. Brown (Christopher Darden) also are nominated. The three-hour ceremony in Los Angeles will be live on ABC television with Jimmy Kimmel as host. –Reuters