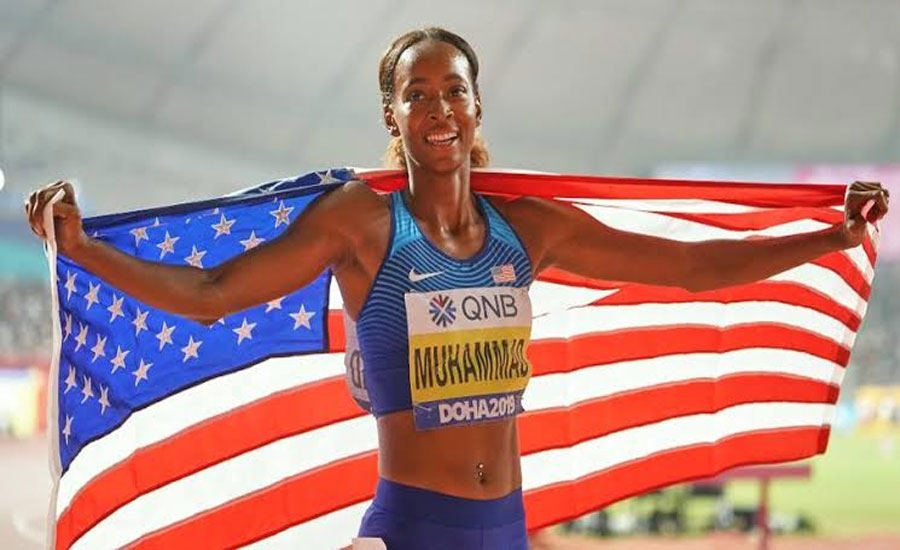 DOHA - Dalilah Muhammad of the United States stormed to a world record-breaking victory in the 400 metres hurdles as hosts Qatar celebrated a gold medal for high jumper Mutaz Essa Barshim at the World Championships on Friday. On a night of high drama played out before a rare packed house at the Khalifa Stadium, Muhammad broke the world record for the second time this year as she powered home to win in 52.16 seconds.
The 29-year-old Olympic champion took gold ahead of compatriot Sydney McLaughlin, while Jamaica's Rushell Clayton took the bronze. "I just wanted the world title so much but to break the world record again is fantastic," Muhammad said after her victory, which improved her record of 52.20sec set in July. "I just decided to go for it from the start," Muhammad added. "It hasn't really sunk in yet but it feels good." The biggest roar of Friday's action was reserved for Qatari high jumper Barshim. 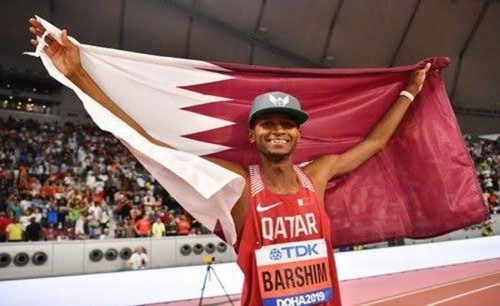 The 28-year-old had the home fans on their feet after a roller coaster competition which saw him clinch victory with a jump of 2.37m Barshim's win came after he had flirted with elimination at 2.33, before clearing the bar on his third and final attempt. Two Russian athletes competing under the Authorised Neutral Athlete banner, Mikhail Akimenko and Ilya Ivanyuk won silver and bronze.
"For me, it was just a dream, amazing. I was not 100 percent ready but when I came and saw all those people cheering for me, even if I was dying, if they take me in a wheelchair or ambulance, I would do everything I can," said Barshim. Barshim's victory earned him an audience with Qatar's ruler, Sheikh Tamim bin Hamad Al-Thani.
"I can't' tell you what he said -- it's top secret," Barshim joked.

In the men's 400m, meanwhile, Steven Gardiner of the Bahamas surged to an emotional victory which he dedicated to his country as it attempts to recover from the devastation of Hurricane Dorian. "I got a lot of messages from people back home. They told me to do my best," Gardiner said. "I wanted to give them a bit more than my best. I wanted to be a world champion and here I am now." Gardiner blasted to victory in a time of 43.48sec, winning ahead of Colombia's Anthony Jose Zambrano who took silver in 44.15sec. Fred Kerley of the United States was forced to settle for bronze with 44.17sec, denying the Americans a gold medal which would have completed a 100m, 200m, 400m and 800m sweep. The men's 3,000m steeplechase saw a nail-biting finale, with Conselsius Kipruto of Kenya just pipping Ethiopian rival Lameche Girma at the line in 8min 01.35sec, the fastest time in the world this year. The 24-year-old Olympic champion had it all to do coming to the final barrier but he summoned up a final burst of acceleration and hit the line abreast of Girma. The duo spent a nervy few seconds awaiting the result before Kipruto was confirmed as the gold medallist. The Kenyan celebrated by climbing onto a barrier -- putting his finger to his lips and then one hand in the shape of a telescope to his eye. Girma set a new national record of 8:01.36. Morocco's Soufiane El Bakkali settled for the bronze timing 8:03.76. In the women's discus, Yaime Perez's long wait for a major outdoor title ended with a gold. The 28-year-old Cuban had never won an Olympic or World Championship medal before, with two fourth placed finishes at the 2015 and 2017 World Championships her best previous finishes. However, a throw of 69.17m with her fifth attempt proved good enough for gold, ahead of compatriot Denia Caballero, who took silver with best throw of 68.44m. Croatia's two-time Olympic champion Sandra Perkovic, bidding to become a three-time World Champion, had to settle for bronze with a best throw of 66.72. The final event of the day saw Toshikazu Yamanishi complete a Japanese double in the race-walking events, the 23-year-old taking gold in the 20 kilometre walk to emulate compatriot Yusuke Suzuki's win in the 50km walk earlier in the championships. Yamanishi finished in a time of 1 hour 26 minutes and 34 seconds, 15 seconds ahead of silver medallist Vasiliy Mizinov in 1hr 26min 49sec. Sweden's Perseus Karlstrom took bronze with 1:27:00. SOURCE: AFP