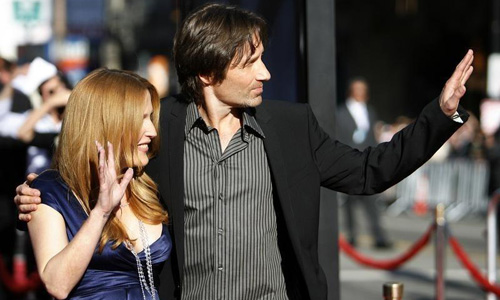 LOS ANGELES - Cult television thriller "The X-Files" will return for a limited series with David Duchovny and Gillian Anderson reprising their FBI agent roles, Fox Broadcasting network said on Tuesday. "The X-Files," which premiered on Fox in 1993, followed FBI special agents Fox Mulder (Duchovny) and Dana Scully (Anderson) as they investigated cases of the unexplained, UFOs and often paranormal phenomenon. Scully was the logical, practical partner of Mulder, who believed that alien worlds could exist within the universe and constantly searched for the truth in government cover-ups and conspiracy theories. The show created by Chris Carter became the longest-running sci-fi series in U.S. network TV history with nine seasons, concluding in 2002. The new series will comprise six episodes, due to start production this summer. An air date has not yet been announced. "I think of it as a 13-year commercial break," Carter said in a statement. "The good news is the world has only gotten that much stranger, a perfect time to tell these six stories." "The X-Files" revival comes on the heels of Fox's recent programming hits with Batman prequel "Gotham" and hip hop drama "Empire." - REUTERS