DUBAI (92 News) – Multan Sultans opened their account in the HBL PSL by upsetting the title holders Islamabad United with a hard-earned five-wicket win on day three in Dubai on Saturday. In a low scoring match Multan’s newest pace bowler Ali Shafiq (2-11),  evergreen Shahid Afridi (2-18) and return to his best Junaid Khan (2-33) restricted Islamabad to 125-7 in their 20 overs after Shoaib Malik won the toss and opted to field first. Luke Ronchi’s 33-ball 55 with five sixes and a single boundary anchored an otherwise unimpressive Islamabad innings as Multan kept taking wickets to check Islamabad’s progress. But Multan too find the going tough before skipper Malik took the responsibility upon himself by scoring an undefeated 29-ball 31 which had two sixes. When 12 runs were needed off the last two overs  Afridi – who finished with eight-ball 16 not out — smashed Waqas Maqsood two sixes to seal the match. Leg-spinner Shadab Khan was the pick of Islamabad bowlers with 2-20 and also effected a run out of Shan Masood who made 20-ball 26 with four boundaries. 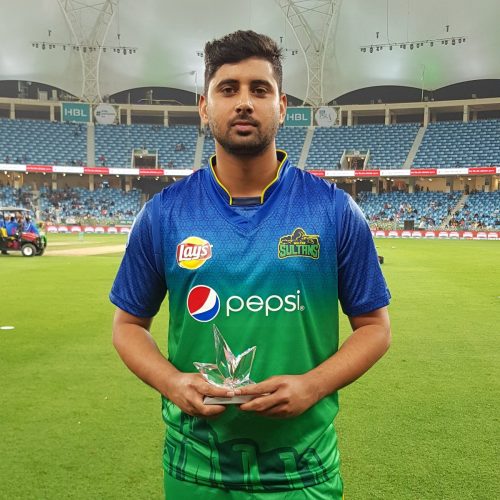 Malik said he was calm as he knew they had batsmen who could change the complexion of the game. “I was calm which comes by playing and I knew that we have explosive batsmen at five, six and seven who could hit big when needed and that’s what I was clam,” said Malik. “We bowled well and the credit goes to the bowlers.” Islamabad skipper Mohammad Sami admitted his team were 20 runs short. “We were some 20 runs short,” said Sami. “We lost wickets at regular intervals and that pushed us back.” It was Ronchi who dealt in sixes when Islamabad batted. Islamabad, who were off to winning start with a victory over Lahore on Thursday, raced to 58 by the eight over but a cluster of wickets halted their progress. After a four-run first over, Ronchi launched attack against spinner Chris Green, hitting him for two sixes but wickets of Rizwan Hussain (four) and Cameroon Delport (nought) pulled them back. But Ronchi – top scorer of HBL PSL last year with 435 in 11 matches — was not bothered as he smashed two sixes and a four off Andre Russell to complete his fifty off just 31 deliveries. But once he fell, caught at deep square-leg off Shahid Afridi, only 36 runs came in the next eight overs. Next over Hussain Talat fell for seven while Phil Salt (four) and Asif Ali ((two) left Islamabad in a dire strait at 76-6. Shadab Khan scored 15 but it were Samit Patel and Faheem Ashraf (both scoring 20 not out) who took Islamabad to 125-7, adding 29 — 13 in the penultimate over. Shafiq earned man of the match award for his excellent bowling, mixing his slower ones to the best effect in his debut HBL PSL match. “I had a good coordination with the skipper and I stuck to what he told me,” said Shafiq, who was not played in team’s loss to karachi Kings on Friday. “You need to mix your slower ones and that’s what I got that rewards.”