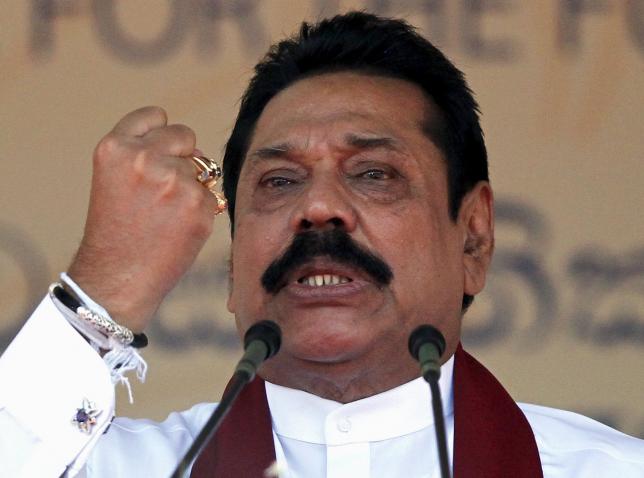 COLOMBO -  The exhumation of the remains of a star rugby player whose death is now the target of a murder investigation has cast a shadow over former President Mahinda Rajapaksa's comeback bid at Sri Lanka's general election next week. Rajapaksa, 69, has denied allegations by the government that Wasim Thajudeen was tortured to death in May 2012 by members of his security team and did not die in a car crash as reported at the time. "There are no bloodstains on our hands," the two-term president said after police last week obtained a court order to exhume Thajudeen's body on suspicion that he had been murdered. Rajapaksa, who has set his sights on becoming Sri Lanka's next prime minister, said the investigation was timed to coincide with the Aug. 17 elections. He demanded an independent inquiry. Nobody has been arrested or charged, but the case has received sensational coverage in the local press that could mobilize voters resentful of Rajapaksa, who as Sri Lankan leader built a close alliance with China. "It's potentially very explosive - it might go right to the top," said analyst Paikiasothy Saravanamuttu, who runs a policy think tank and election monitoring group. Although still held in high esteem by much of Sri Lanka's majority Sinhala community for defeating a 26-year Tamil insurgency in 2009, Rajapaksa is reviled by others who accuse him of running a brutal dynastic regime. According to a poll by Saravanamuttu's Centre for Policy Alternatives, most minority Tamils and Muslims back Prime Minister Ranil Wikremesinghe's reformist coalition. Rajapaksa has a narrow edge among Buddhist Sinhalese - who make up seven in 10 voters on the strategically located Indian Ocean island of 20 million. In a one-on-one premiership contest, Wikremesinghe would have a 10-point lead. Thajudeen's remains, wrapped in polythene, were exhumed on Monday on the order of a court to establish whether his injuries were consistent with a police report that his car crashed into a wall on a quiet Colombo side street and caught fire. Government spokesman Rajitha Senaratne alleged last week that three members of the presidential security guard had tortured and killed Thajudeen, who played for the national rugby side captained by Rajapaksa's second son, Yoshitha. Officials also allege that the Rajapaksa administration suppressed a post mortem report which found that Thajudeen had suffered extensive injuries to his head, neck, pelvis and legs. The autopsy's findings were only released after Maithripala Sirisena defeated Rajapaksa in a Jan. 8 presidential vote. Following the opening of the murder investigation, Sirisena has fired his security detail. - Reuters