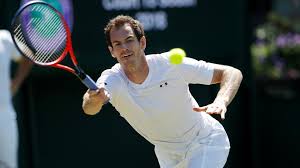 (Reuters) - Former world number ones Andy Murray and Victoria Azarenka have been handed wild cards to compete at the Cincinnati Open next month, the tournament’s organisers have said.
Murray pulled out of this year’s Wimbledon saying his right hip was still not ready for the demands of a Grand Slam. That was after the Scot made a comeback in June at Queen’s Club following almost a year out with the injury that required surgery in Australia in January. Two-times grand slam winner Azarenka, who won the Cincinnati Open in 2013, will return to the women’s draw for the first time since 2016 as she continues her comeback following a prolonged legal battle over the custody of her son Leo last year. “The resumes for Vika and Andy really speak for themselves,” tournament Director Andre Silva told the organisers’ website. “I think many tennis fans are eager to see each of them back on the court, and we are pleased to offer them both wild cards to play the Western & Southern Open.” A further seven players - three men and four women - will be handed wild cards for the tournament, which begins on Aug. 11, around two weeks before the US open starts on Aug. 27.