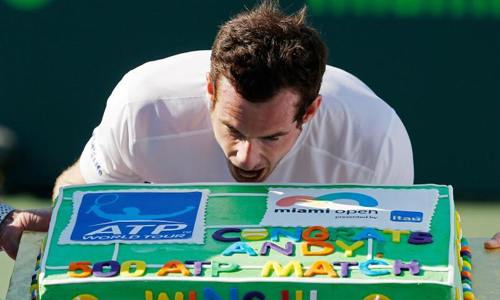 MIAMI - Andy Murray won the 500th match in his career after beating Kevin Anderson 6-4 3-6 6-3 on Tuesday to move into the quarter-finals of the Miami Open for the fourth straight year. The gangly Anderson fought back well in the second but after trading early breaks in the third the Scot took control breaking his South African opponent again to grab a 3-1 advantage and never looked back. The world number four becomes the 46th man in the open-era to reach 500 career wins and the first British male. He is one of only nine active players to have reached the milestone. Czech Tomas Berdych made it six quarter-finals out of six tournaments this year after he advanced when Frenchman Gael Monfils retired in the second set. Eighth-seed Berdych was leading 6-3 3-2 when Monfils retired after falling badly in the fifth game. Berdych will face Argentine Juan Monaco who beat Spaniard Fernando Verdasco 6-3 6-3. Verdasco had beaten compatriot and second seed Rafa Nadal in the previous round. Austrian Dominic Thiem reached his first Masters 1000 series quarter-final after beating France's Adrian Mannarino 7-6 (5) 4-6 7-5. World number one Novak Djokovic faced Ukrainian Alexandr Dolgopolov later on Friday while Japan's fourth seed Kei Nishikori was due to take on Belgium's David Goffin. - REUTERS