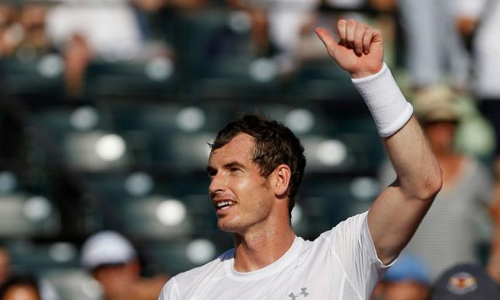 MIAMI - Third-seed Andy Murray recovered from an early setback to beat Austrian Dominic Thiem 3-6 6-4 6-1 on Wednesday to reach the semi-finals of the Miami Open. Murray, a two-time winner at Key Biscayne, will face the winner of Wednesday's other quarter-final between Argentine Juan Monaco and Czech Tomas Berdych in the semi-finals. The final is on Sunday. The Scot's 501st career win was far from easy as the 21-year-old Austrian, ranked 52nd in the world, used an impressive backhand and some entertaining tennis to take the first set. But after Murray, far from his best, forced a deciding set, he took firm control after earning a break at the end of a long fourth game to go up 3-1. "At the beginning of the match I didn't return well, especially returning his first serve. That put me in sort of a defensive position a lot when he was serving. I ended up doing quite a lot of running there," said Murray. "In the second set I went up and I was creating quite a lot of opportunities, which was good, but I was just not quite finding the right shot. "I think in the third set the difference was really my returning. I returned his first serve extremely well. I put him on the back foot," he said. Thiem was philosophical about his loss. "He won because he was the better player. It's very simple. I played a very good first set of course but if I could keep at that level of the first set I wouldn't be ranked 52nd I would be much higher. "I played a little bit on my limit. Of course I am trying to work to make that my standard level." Thursday's other quarter-finals will see top seed Novak Djokovic up against Spain's David Ferrer and Japan's fourth-seeded Kei Nishikori against American John Isner. - REUTERS