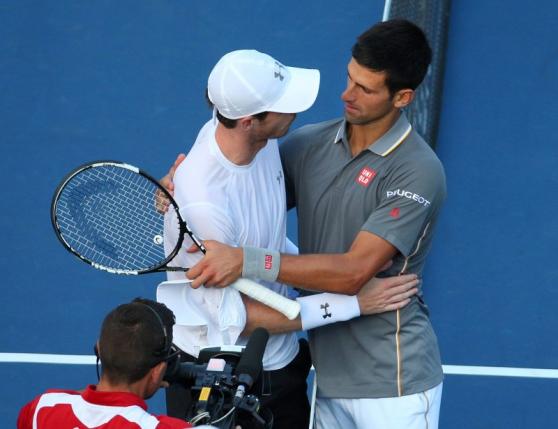 MONTREAL - Andy Murray ended a long drought against Novak Djokovic when he beat the Serbian 6-4 4-6 6-3 in a draining final of the Rogers Cup on Sunday. The British right-hander ended an eight-match, 25-month losing streak against Djokovic and improved from third to second in the world rankings. He had not beaten the world number one since the 2013 Wimbledon final. Djokovic, who lost for just the fourth time this year, had won 12 consecutive Masters Series finals since he fell to Roger Federer in Cincinnati in 2012. Murray and Djokovic embraced at the net after a three-hour battle of attrition that left them exhausted as courtside temperatures reached 40C. “Everybody wants me and Novak to dislike each other and people always try to stir things up between us,” Murray, 28, said in a courtside interview. “It’s impossible to be extremely close when we’re playing in these sorts of matches because it’s so mentally challenging and physically demanding and you need to try to still have that competitive edge as well. “But it’s not easy, not only because we get on but because he’s bloody good, he’s number one in the world and he hasn’t lost in a Masters Series this year. To win against him is extremely tough.” Murray made the decisive break in the second game of the final set but it was not all plain sailing after that, as he survived an 18-minute fifth game to hold serve and take a 4-1 lead en route to his third title on the Canadian hardcourts, and first since 2010. “We’ve played many matches like that, especially in grand slams,” Murray said. “If this was the U.S. Open, we’d have to play another couple of sets like that, which isn’t easy. “He’s obviously one of the best returners in the world and he obviously has a lot of confidence to stand and fight right to the end, so you have to play right to the end of the match and weather the storms when they come, and I managed to that today.” The vanquished Djokovic said sub-par serving had cost him the match. “Andy is deservedly a winner today on the court," he said. "I thought what made the difference was his serve and my serve. I didn't serve well the first set and a half. “But not taking anything away from him, from his victory. He deserved it. He stepped in, played some great shots. Most of all the moments when he needed to, he served very, very well." - REUTERS