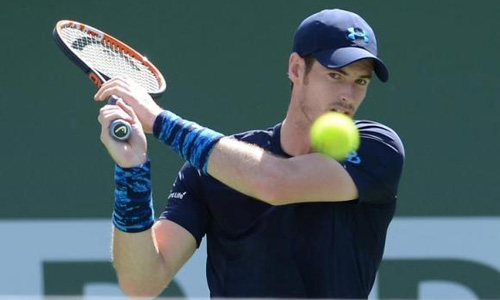 MIAMI - Andy Murray is hopeful that Swede Jonas Bjorkman will share a similar philosophy with his coach Amelie Mauresmo when he joins his team on a trial basis, the Scotsman said on Tuesday. Bjorkman, a former world number four who retired from professional tennis in 2008, will join Murray's coaching set-up sometime after he finishes his involvement in a Swedish television dance show. "I don't think he has a huge ego so I wouldn't envisage that being a huge problem," Murray told reporters at the Miami Open, where he is the third seed. "They have spoken to each other a number of times on the phone, both have said to me that it went very well, they both like each other and know each other from their playing days which is good. "But obviously until we spend a bit of time together it would be tough to know for sure." Murray, beaten in this year's Australian Open final by Novak Djokovic, was keen to add some depth to his support crew given Mauresmo's busy schedule. World number five Murray, twice a grand slam champion, trimmed his entourage at the end of last season with hitting partner Dani Vallverdu jettisoned. Murray said he often chatted with Bjorkman at tournaments and feels the former Wimbledon and U.S. Open semi-finalist who also excelled as a doubles specialist with nine grand slam titles has plenty to offer. "A lot of the things that I want to work on and improve in my game (are things) that he was very good at himself," said Murray. "Mentally he was very strong. He got the most out of his game. He was a very good competitor. He was obviously physically very strong as well, he played singles and doubles most weeks and had a very long career. "So, I decided to chat to him, we ended up speaking for two and a half hours on the phone and it went by very quickly, talking about the game, all parts of the game really. "I liked it and decided to get him to come along and see how it goes." - REUTERS