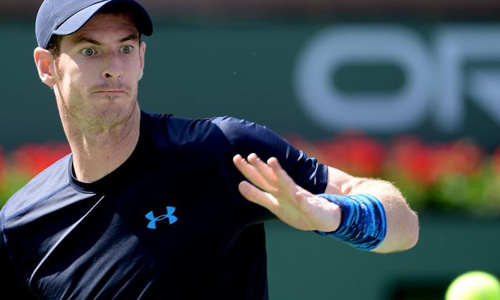 CALIFORNIA (Reuters) - Fourth seed Andy Murray, with a consummate display of power and touch in tricky conditions, reached the BNP Paribas Open semi-finals with a landmark 6-3 6-4 win over Spaniard Felicano Lopez on Thursday. On another hot but blustery afternoon at the Indian Wells Tennis Garden, the Scot broke left-hander Lopez once in the opening set and twice in the second to claim victory on the showpiece stadium court. Murray will next face top-seeded Serb Novak Djokovic, who was gifted a place in the last four when Australian Bernard Tomic pulled out of their quarter-final citing a back injury. Tomic, ranked 32nd, had reached the last eight at an elite ATP Masters 1000 event for the first time with a 6-4 4-6 6-4 win over compatriot Thanasi Kokkinakis in the previous round. "I thought I played a pretty good match, I created a lot of opportunities," world number four Murray said after moving ahead of Tim Henman as Britain's most successful men's player in the Open era with 497 singles victories. "The wind was definitely the trickiest part of the day. Both of us struggled a little bit with it. I just managed to play a little bit more solid." Murray, whose best run at Indian Wells came in 2009 when he finished runner-up to Rafa Nadal, broke Lopez in the fourth game of the match to set the tone. The Briton went on to treat the crowd to a dazzling array of searing backhands, pinpoint passes, top-spin lobs and delicate drop shots to claim the opening set in 38 minutes. The Spanish left-hander, making errors on his usually reliable sliced backhand, also failed to hold serve in the first and seventh games of the second set before he broke Murray for the only time in the eighth. However, the Scotsman served out to love in the 10th game, sealing his 10th victory over Lopez in 10 meetings when a backhand service return flew long. Asked for his reaction to Djokovic's walkover, Murray replied: "Obviously that's good for him, a few days off now for him. "I get a day (off) as well before the semis so both of us should be fairly fresh going into that one," he said. "I'm looking forward to it." Murray will take on Djokovic for the first time since he lost to the Serb in four sets in this year's Australian Open final.