MURREE (92 News) – The government declared Murree as calamity-hit after 22 people were killed due to the heavy snowfall on Friday night.

ASI Iqbal and his seven family members died after being stuck in the heavy snow on Kuldana Road. The tourists remained trapped in their vehicles through out the night. Sixteen bodies were found from two vehicles.

According to the Met Office, Murree has so far received 5-8 feet snow. On Saturday, gusty winds started blowing after a pause in the snowfall. Thousands of tourists have been stuck in their vehicles.

The tourists are facing numerous problems due to the snow storm. Food and water have run out in several areas. The administration is unable to reach the besieged people. 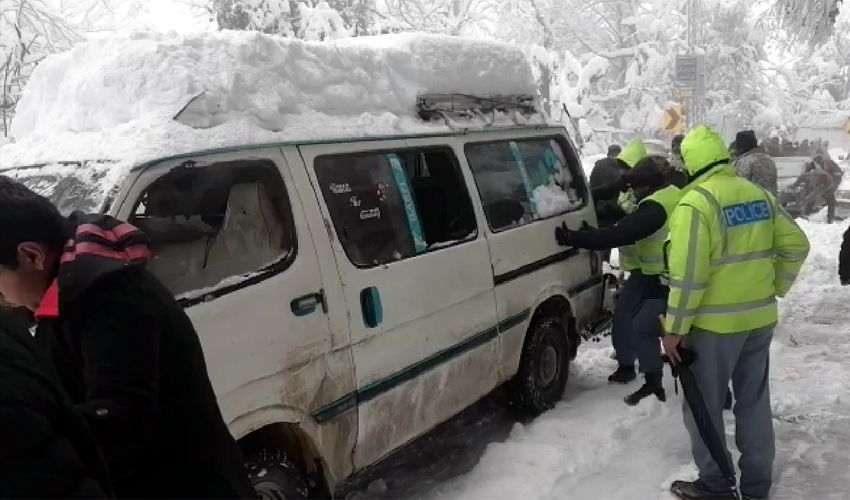 The tourists are facing numerous problems due to the snow storm. Food and water have run out in several areas. The administration is unable to reach the besieged people.

Talking to 92 News, Murree Assistant Commissioner Umar Maqbool said that the rescue operation is rapidly continuing in the affected areas.

He said that rescue activities faced difficulties due to struck cars on the roads. “A huge number of tourists have returned. The roads of Abbotabad will be cleared today. Heavy machinery is busy rescuing activities consecutively for last three days. Electricity has been restored in Murree and there is not any issue of gas and water. All relevant departments are busy working in field. We are trying to facilitate tourists as much as we can.”

The Murree AC said appealed the tourists not to visit Murree. "We appeal to locals to help the besieged people,” he added.