Muslims in India are in serious danger: US newspaper exposes reality

Muslims in India are in serious danger: US newspaper exposes reality

NEW DELHI (Web Desk) – The American daily newspaper “Los Angeles Times” exposed the reality of Indian Modi-led government, saying that the Muslims are in serious danger in India. According to report of US newspaper, the frightened Muslims have been forced to leave their area in Indian state. The police force uses the power in Muslim-majority areas and universities. “Muslims are being harmed,” the report added. In the report, when Indian police barged into the university library where Rohool Banka was studying, the 25-year-old student, a self-described proud Muslim, decided his best chance of survival was to pretend he was Hindu. “In the name of God, let me go,” he told the police — but he intentionally used a word Hindus use for god, bhagwan, instead of the Muslim Allah. The ruse didn’t work. Banka and other Muslim students in the library said officers told them to recite the kalima — a statement of faith in Islam, often said before one dies — during a crackdown in which police fired tear gas, assaulted students with batons and left more than 100 injured. The Dec 15 incident at Jamia Millia Islamia, a New Delhi university with a Muslim-majority student body, has served as a major flashpoint in deadly unrest that has gripped large parts of India for almost two weeks. 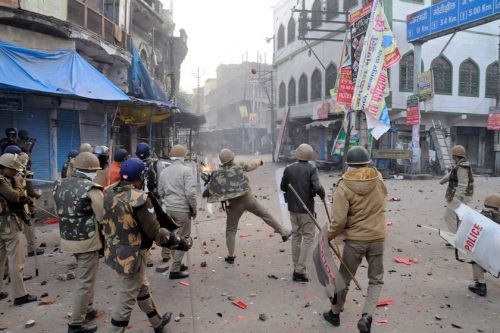 Protests over a new citizenship law that critics say discriminates against Muslims have erupted across the country, with civilians and human rights groups accusing India’s police of using excessive force in predominantly Muslim areas and universities. The allegations of religious bias have blighted Prime Minister Narendra Modi’s record as leader of the world’s largest democracy. As demonstrations continued this week, Modi’s government enforced harsh laws against public gatherings and blocked internet access in some areas, making it more difficult for protesters to organize — and to report official abuses. Many critics of Modi’s Hindu nationalist government say security forces have targeted Muslims, who make up approximately 14% of India’s 1.3 billion people, the largest religious minority in a country that is overwhelmingly Hindu. 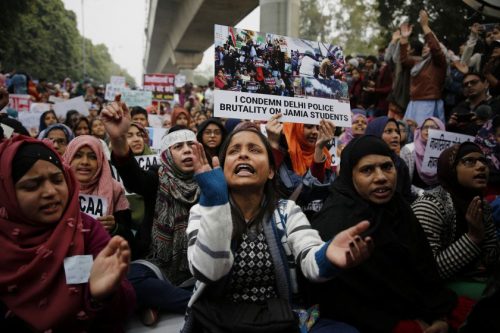 Attempting to flee the campus, Banka said he was attacked by dozens of officers before police threw him like a “sack of potatoes” onto a pile of other students, many dazed or unconscious. Blood ran down the bridge of his fractured nose and his left eye was injured so badly that it eventually swelled shut. The perennial desert oasis offers activities aplenty. “I was broken,” Banka recalled. “I was telling them, ‘I may die. Please leave me here.’ ” Banka had entered the library that day to study for an interview for a post-graduate degree. Many students sought refuge there when clashes broke out between police and protesters at a nearby demonstration. The ensuing police crackdown meant that others, like Banka, who weren’t involved in the protest became victims of the violence as well. “They broke everything and started beating us inhumanely. It was unexpected,” Banka said. “I have never seen people entering like this inside the campus — inside the library — and beating students.” Banka remembered seeing another student, Mohammad Minhajuddin, lying on the floor of the library bathroom, bleeding from one eye. Minhajuddin eventually lost sight in that eye. “I thought he was dead,” Banka said. “It was a helpless situation. I couldn’t help him because I was also bleeding.” Hours later, when students at another predominantly Muslim institution, Aligarh Muslim University in northern India, marched in solidarity with Jamia Millia Islamia (National Islamic University), they too were met with force — by some accounts, even more ferociously than their peers in Delhi. According to a fact-finding report led by prominent activist Harsh Mander and released this week, police and security forces fired stun grenades and bullets at Aligarh and used religious slurs against Muslim students. The crackdown has been harshest in the country’s most populous state, Uttar Pradesh, where at least 17 people have been killed and more than 5,000 detained in the last two weeks.

Human Rights Watch has called on Indian authorities to cease using “excessive lethal force” against protesters. But according to witnesses and family members, many of those swept up in the crackdown were not protesting to begin with. In the Muslim-majority town of Nehtaur, about 90 miles northeast of Delhi, 20-year-old Mohammed Suleman was shot dead by police last Friday after he went to a mosque to attend weekly prayers. Police say Suleman fired first, an allegation that his family vigorously disputes, saying he merely got caught up in a protest. “Whatever the police are claiming, it is completely false,” said Munsab Malik, Suleman’s cousin. “It could never happen. They are doing it to save themselves.” After receiving word that Suleman was lying on the ground covered in blood near the mosque, members of the family rushed over and took him to a hospital. But it was too late. Their pain did not end there, however. Police prevented the family from taking the body home to perform last rites, saying the postmortem and burial needed to be conducted in another town. Malik said the crackdown has had a chilling effect in Nehtaur. Protests have ceased and many residents have fled to ancestral villages, he said. “Entire neighborhoods have gone empty in fear,” he said. “There’s so much pressure from the administration, like brute force. The way they treated the protesters shows their anger at us. The police are beating up protesters so viciously that some of them won’t be able to eat with their hands anymore.”