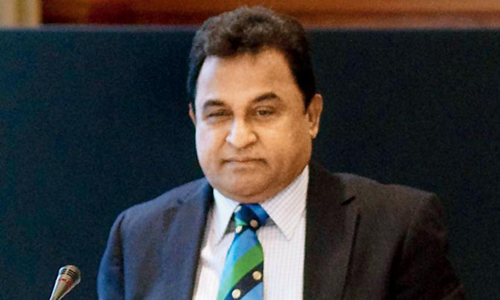 DHAKA – Mustafa Kamal has resigned as the president of the International Cricket Council (ICC), the Bangladeshi administrator announced on Wednesday. Kamal said he quit after being denied the right as ICC chief to award the World Cup trophy to winners Australia in Sunday's final in Melbourne. ICC Chairman Narayanaswami Srinivasan handed over the trophy to the victorious hosts, prompting Kamal to launch a scathing attack on the Indian and the ICC top brass whom he termed "ugly people". "I'm again requesting -- these type of people should be away from cricket, otherwise cricket will be spoilt, cricket will not move forward," Kamal told reporters in Dhaka. "My earnest request to ICC is to revisit those things. I'm sure people will find out why I have resigned and they will unearth the truth -- who are these people, what are they doing and how they are running ICC," he added. The governing body said it was not aware of Kamal's resignation. "We have no information about Kamal's resignation," an ICC spokesperson told Reuters. The ICC had criticised Kamal for his outburst last month against a controversial decision in the World Cup quarter-final match between India and Bangladesh. India opener Rohit Sharma was caught in the deep and umpire Aleem Dar deemed it was an above waist-height no-ball even if replays contradicted his opinion. After India won the match, Kamal demanded the governing body looked into the dismissal while ICC termed his outburst as "very unfortunate". –Reuters