My meeting with British HC was not related to Altaf’s hearing in London: Ch Nisar 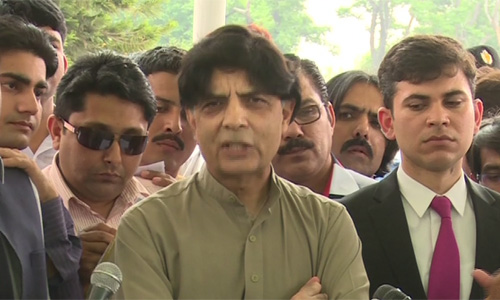 My meeting with British HC was not related to Altaf’s hearing in London: Ch Nisar

LAHORE (92 News) – Federal Interior Minister Chaudhry Nisar has said that his meeting with British High Commissioner Philip Barton was not related to the hearing of MQM chief Altaf Hussain in London. Talking to the media on Wednesday, he said that he does not brief any foreign envoy and only conversation is held. He said that he would help the British government with regard to the Imran Farooq murder case as per law and constitution of Pakistan. The minister said that his meeting with British High Commissioner Philip Barton was scheduled. “Imran Farooq murder case is a sensitive matter, not a political one.” He said that the Pakistan agencies had carried out an important activity in the case. “Rhetoric on Imran Farooq and Shafqat Hussain cases should be avoided.” He appreciated the performance of Pakistani security and intelligence agencies in the arrest of Muazzam Ali. “Altaf Hussain’s statement was positive yesterday.” The minister said that they are not looking at the Imran Farooq murder case politically.