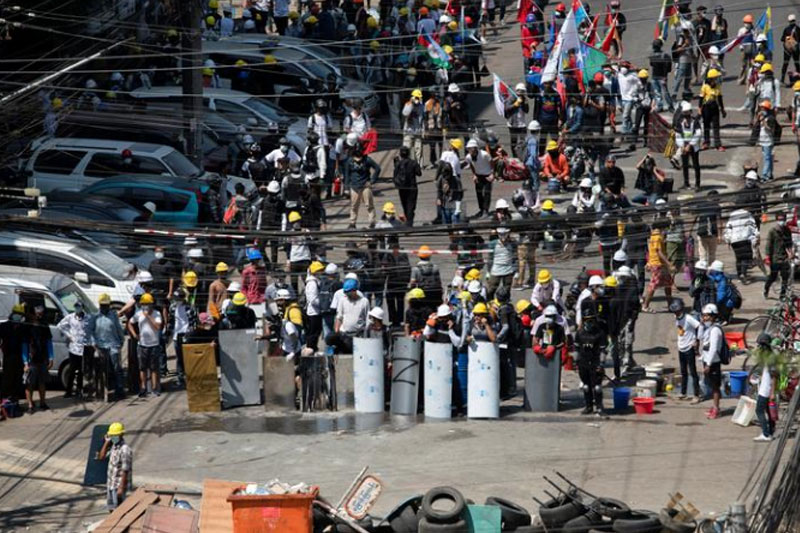 YANGON (Reuters) - Myanmar’s junta lost a tug of war over leadership of its U.N. mission in New York and the United States unveiled new sanctions targeting military conglomerates after the deaths of dozens of civilians protesting against last month’s coup.

“Our federation will be on road to fight the military regime together with the people,” the All Burma Federation of Student Unions posted on social media late Thursday.Police broke up rallies with tear gas and gunfire in several cities across Myanmar on Thursday, as protesters returned to the streets after the United Nations said 38 people had been killed on Wednesday in the bloodiest day of protests up to now.

” Bachelet said more than 1,700 people had been arrested, including 29 journalists.A spokesman for the ruling military council did not answer telephone calls seeking comment.A clash over who represents Myanmar at the United Nations in New York was averted - for now - after the junta’s replacement quit and the Myanmar U.N. mission confirmed that Ambassador Kyaw Moe Tun remained in the job.

The junta fired Kyaw Moe Tun on Saturday after he urged countries at the U.N. General Assembly to use “any means necessary” to reverse the coup.In Washington, it was unclear whether Myanmar’s embassy was still representing the junta, after it issued a statement decrying the deaths of civilians protesting the coup and calling on authorities to “fully exercise utmost restraint.”One diplomat in the embassy also resigned and at least three others said in posts on social media they were joining the civil disobedience movement against the military government.

“This is encouragement for us who are going to go out on streets tomorrow,” wrote Facebook user U Zay Yan, responding to the news.

The U.N. human rights investigator on Myanmar, Thomas Andrews, urged the Security Council - which meets to discuss the situation on Friday - to impose a global arms embargo and targeted economic sanctions on the junta.States should impose sanctions on the Myanmar Oil and Gas Enterprise, now controlled by the military and its largest source of revenue, he said in a report.

Myanmar activists continued to call for the release of Suu Kyi, 75, who was detained on the morning of the coup, and recognition of her Nov. 8 election victory. They also reject the junta’s promise to hold new elections at an unspecified date.

Suu Kyi’s National League for Democracy (NLD) party won the election in a landslide but the military has refused to accept the result citing fraud. The election commission said the vote was fair.

Hundreds of people on Thursday attended the funeral of a 19-year-old woman who was shot dead at a protest while wearing a T-shirt that read “Everything will be OK”. After her death, the slogan went viral as a symbol of defiance..

The U.S. Commerce Department designated trading curbs on Myanmar’s Ministry of Defence, Ministry of Home Affairs and two military conglomerates that control swathes of the economy, with interests ranging from beer to real estate.

But the measures are expected to have limited impact as the entities are not major importers.

“A bigger impact would be to go after the financial assets of the military leaders of the coup,” said William Reinsch, a former Commerce Department official.

The European Union suspended support for development projects to avoid providing financial assistance to the military. The support in past years has involved more than 200 million euros ($241 million) in separate programmes.

Myanmar’s generals have long shrugged off outside pressure.The United States has told China, which has declined to condemn the coup, that it expects it to play a constructive role. China has said stability is a top priority in its strategic neighbour.