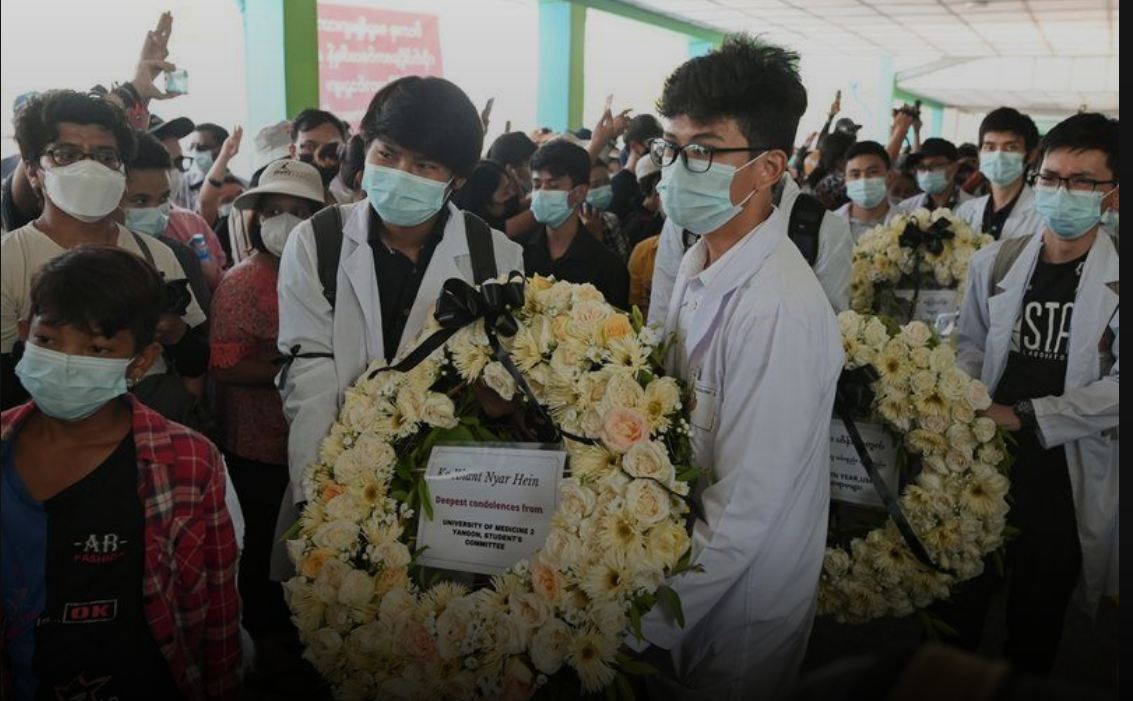 YANGON (Reuters) – The families of dozens of people killed in demonstrations against military rule in Myanmar attended their funerals on Tuesday as more protesters defied the security forces and at least one man was shot dead.

The political and economic crisis over the Feb. 1 overthrow of Aung San Suu Kyi’s elected government could also force the poor into hunger as food and fuel prices rise, the United Nations food agency said.

Security forces shot dead at least 20 people on Monday after 74 were killed a day earlier, including many in a suburb of Yangon where Chinese-financed factories were torched, according to advocacy group the Assistance Association for Political Prisoners (AAPP).

On Tuesday, a crematorium in Yangon reported 31 funerals, a mourner at one of the ceremonies said.

Hundreds of young mourners spilled out on to the street at the funeral of medical student Khant Nyar Hein who was killed in Yangon on Sunday, the bloodiest day of the protests.

“Let them kill me right now, let them kill me instead of my son because I can’t take it any more,” the student’s mother was seen saying in a video clip posted on Facebook.

Mourners, including many fellow medical students in white lab coats, chanted: “Our revolution must prevail.”

Some families told media the security forces had seized the bodies of victims, but they would still hold a funeral.

At least 184 people have been killed by the security forces in the weeks of protests, the AAPP said, with the toll rising as one protester was shot dead in the central town of Kawlin, a resident there said.

People held up pictures of Suu Kyi and called for an end to the repression during a small protest in the southern town of Dawei on Tuesday, the Dawei Watch media outlet reported. There was no report of violence.

U.N. Secretary-General Antonio Guterres was appalled by the escalating violence and called on the international community to help end the repression, his spokesman said, while the United States also denounced the bloodshed.

“The military is attempting to overturn the results of a democratic election and is brutally repressing peaceful protesters,” U.S. Secretary of State Antony Blinken told a news conference in Tokyo.

A junta spokesman did not answer telephone calls to seek comment and Reuters could not independently confirm all the casualties.

State broadcaster MRTV said martial law had been imposed in parts of Yangon and military commanders would take over administration of districts and courts.

The U.N. human rights office said some 37 journalists had been arrested, including 19 who remained in detention, while “deeply distressing” reports of torture in custody had emerged and five people were known to have died in detention.

“We call on the military to stop killing and detaining protesters,” the office’s spokeswoman, Ravina Shamdasani, said in Geneva.

The army said it took power after its accusations of fraud in a Nov. 8 election won by Suu Kyi’s National League for Democracy (NLD) were rejected by the electoral commission. It has promised to hold a new election but has not set a date.

The military ruled the former British colony for decades after a 1962 coup and cracked down hard on uprisings before beginning a tentative transition to democracy a decade ago.

That has been derailed and instead the protests and a civil disobedience campaign of strikes are paralysing large parts of the economy and could undermine the ability of poor families to feed themselves, the U.N. World Food Programme (WFP) warned.

The WFP said the price of rice was up as much as 35% in parts of the north and prices of cooking oil and pulses were also higher, while the cost of fuel had risen by 15% since Feb. 1.

“These rising food and fuel prices are compounded by the near paralysis of the banking sector, slowdowns in remittances, and widespread limits on cash availability,” the WFP said.

Suu Kyi, 75, has been detained since the coup and faces various charges including illegally importing walkie-talkie radios and infringing coronavirus protocols.

Western countries have called for her release and condemned the violence while Asian neighbours have offered to help resolve the crisis, but Myanmar has a long record of rejecting outside intervention.

The military has charged the international envoy of the ousted government, who is abroad, with treason for encouraging the civil disobedience campaign and calling for sanctions, army-run television announced.

Authorities have also detained an official from Open Society Myanmar, a group set up with the help of the foundation of billionaire philanthropist George Soros, and are looking for 11 other employees on suspicion they passed funds to opponents of the coup, a state-run newspaper said.