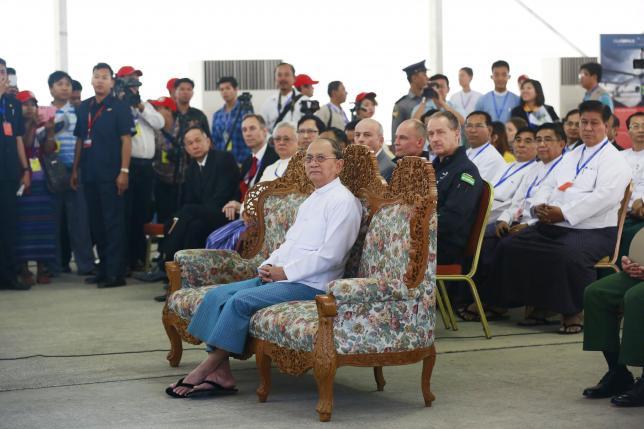 YANGON - Myanmar's government and 16 ethnic armed groups agreed on Monday on the draft of a nationwide ceasefire that if ratified and respected would mark significant progress toward ending over 65 years of armed conflict in the country. Myanmar's semi-civilian government, which took power in 2011 after 49 years of military rule, has made ending hostilities with the many groups that have taken up arms since independence in 1948 one of its priorities. The draft will be finalised on Tuesday and then taken to the leaders of the different rebel groups for ratification, said Hla Maung Shwe, a senior adviser from the Myanmar Peace Centre, a group set up by the government to facilitate the peace process. "If everything goes well, the Nationwide Ceasefire Agreement will be signed by top leaders of ethnic armed groups in Naypyitaw in May," he added. The government and the rebel groups, many of them fighting for increased autonomy for ethnic minorities, have held seven rounds of talks to negotiate the agreement since 2013. The government had targeted reaching a deal before a general election expected to take place in November this year. Myanmar's authorities has been unsuccessful in meeting previous targets for concluding nationwide peace pacts, with several groups holding out for political guarantees that the peace negotiators say they have no authority to make. Sporadic resurgences of violence and complaints about the military's role in the complex process have hampered progress. Not all of Myanmar's rebel groups have participated in the peace process under the umbrella Nationwide Ceasefire Coordination Team, which represents the sixteen ethnic armed groups. President Thein Sein declared a state of emergency in a region near the Chinese border in February after fierce fighting between the army and the Kokang ethnic Chinese rebel group. That was the first time military rule had been invoked under Myanmar's 2008 constitution. The Kokang are not part of the peace process. The United Nationalities Federal Council (UNFC), an umbrella organization representing ethnic armed groups, has said that a meaningful ceasefire cannot be agreed while Myanmar's military continues offensives against ethnic groups. "As the escalation of war not only on the ground but also from the air recurred, the current negotiation is to no avail," the UNFC said in a March 28 statement. The United States and other foreign governments that have supported reforms in Myanmarhave repeatedly called for progress on the ceasefire.- Reuters