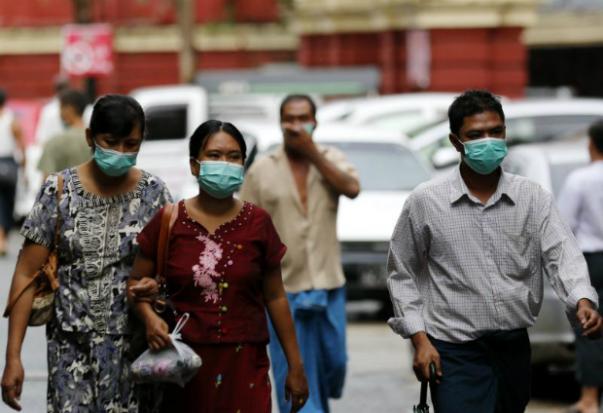 YANGON (Reuters) - Four more people have died in an outbreak of H1N1 influenza in Myanmar, a health official said on Monday, taking the death toll in the latest outbreak to 10 as the government stepped up public awareness campaigns about the swine flu virus.

The latest H1N1 outbreak began more than a week ago, said Thinzar Aung, deputy director of the infectious diseases department at the Ministry of Health and Sport, with Yangon, Myanmar's biggest city, the worst affected area.

Authorities have carried out health awareness campaigns and sought to calm public fears over the outbreak, although stores have sold out of surgical masks in Yangon. Authorities have told the public not to panic and described the latest outbreak as a regular seasonal occurrence.

"We have never withheld any information about the infection of the disease," heath minister Myint Htwe was quoted as saying by state-run newspaper Global New Light of Myanmar on Monday.

"We are releasing real information on the seasonal influenza H1N1 in real time," he said.

H1N1 has been among the strains of flu circulating in Myanmar seasonally since a global pandemic in 2009, although deaths from the virus had not been reported in recent years, heath officials have said.

Aside from those killed by the virus, 51 people have been confirmed to have contracted the disease, according to the health ministry. It has called on hospitals and clinics to report patients showing signs of influenza-like illness.

Separately, Myanmar's livestock ministry has also reported an outbreak of H5N1 bird flu in the south. More than 1,800 chickens were culled after the virus was detected at a farm in the southern town of Dawei last month.