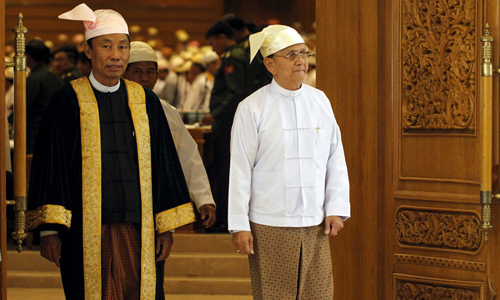 YANGON - Myanmar's powerful ruling party chief Shwe Mann has been ousted from his post, party members said on Thursday, apparently after losing a power struggle with President Thein Sein three months before a general election. Security forces surrounded the headquarters of the ruling Union Solidarity and Development Party (USDP) in the capital, Naypyitaw, late on Wednesday and prevented members there from leaving. Shwe Mann's ouster from the party follows rare discord within the establishment over the role of the military, which handed power to a semi-civilian government in 2011 but retains an effective veto over the political system. "Shwe Mann isn't the chairman of the party anymore," said a USDP member of parliament. "He's in good health and at home now." Family members said Shwe Mann was at home in Naypyitaw when the soldiers took control of the USDP compound. Shwe Mann still holds the position of speaker of parliament, the source said, speaking on condition of anonymity due to the sensitivity of the subject. Shwe Mann has been replaced as party chairman by the Htay Oo, who will also retain his position as vice chairman, another senior member of the party said. Htay Oo is an ally of Thein Sein. One of Thein Sein's closest aides Tin Naing Thein, resigned from his post of minister at the president's office on Wednesday and has become the new secretary general of the party, a senior party official said. He replaces Maung Maung Thein, a supporter of Shwe Mann. Tension has risen between Thein Sein and Shwe Mann, both former top military officers, over the selection of candidates for the November election, party sources said earlier. The two are old rivals and both have suggested they would accept the job of president after the Nov. 8 parliamentary election. Shwe Mann has built ties with Nobel laureate and opposition leader Aung San Suu Kyi, who has called repeatedly for the military to withdraw from politics, and he supported an attempt in parliament in June to amend the constitution to limit the military's political role. Tension rose on Wednesday after the USDP selected only 59 of 159 senior officers who retired from the military to run as candidates for the party in the coming election, the party sources said. 'REORGANIZATION' Late on Wednesday, several trucks of soldiers and police officers arrived at the ruling party's headquarters. After the security forces took control of the compound, Soe Tha, one of the founders of the USDP, and Htay Oo led a late-night meeting of senior party officials that lasted into the early hours of Thursday, party members said. Both men are close to the president. Shwe Mann and high-ranking party members considered to belong to his faction in the USDP were not present at the meeting, the sources said. The security forces left after the meeting concluded at around 2.30am, sources said. "What I heard ... was that there was a lot of reorganization in the party last night," said government spokesman Ye Htut, who said he could not give further details as he is not a member of the party. Shwe Mann was a presidential hopeful when the military handed over power to a semi-civilian government after 49 years of rule in 2011. Despite the establishment of the new government, the military has resisted recent efforts to introduce constitutional amendments to loosen its grip. The USDP is comprised largely of former military officers and was created from a social movement set up by the former junta. It is unclear why the party selected only 59 of 159 senior officers to be candidates in the election but the decision likely angered officers and politicians keen to preserve the military's sway. The party is expected to fare poorly against Suu Kyi's National League for Democracy in the election. The constitution reserves 25 percent of seats in parliament for unelected military officers. Changes to the constitution require the support of at least 75 percent of lawmakers, giving the military an effective veto over changes. An amendment that would have seen the threshold of support lowered to 70 percent failed, as expected, to gain enough support with lawmakers in a June vote. -Reuters