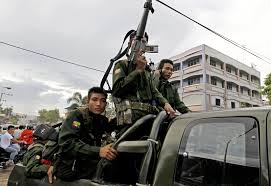 YANGON (Reuters) - Forty-seven Myanmar soldiers have been killed this week in fighting with ethnic minority insurgents near the border with China, the military said in a statement issued on Friday. The fighting and heavy casualties are a setback for government efforts to forge a nationwide ceasefire and end a patchwork of insurgencies that have bedeviled Myanmar since shortly after its independence in 1948. The clashes in Shan State in the northeast between the army and a group called the Myanmar National Democratic Alliance Army (MNDAA) have alarmed China which fears an influx of villagers fleeing violence and called this week for peace on the border. The military said 73 soldiers were wounded in clashes from Monday to Thursday. It gave no more details of the fighting but the state-backed Global New Light of Myanmar newspaper reported on Thursday that the military had carried out five air strikes against the rebels. Officials from the MNDAA were not available for comment. Myanmar's reformist, semi-civilian government, which took power after 49 years of military rule, wants to implement a nationwide ceasefire agreement with all rebel factions. The government has struck truces with almost all of the groups but clashes do occasionally flare up. An official in an alliance of ethnic minority factions which has been discussing the nationwide ceasefire with the military said the clashes near the Chinese border did not bode well for the talks. "Because of the fighting, negotiations will have some difficulty," said Nai Hong Sar, vice chairman of the United Nationalities Federal Council, which represents 11 minority factions. Chinese Foreign Ministry spokeswoman Hua Chunying said China supported efforts to resolve their dispute peacefully so that the refugees could return to Myanmar as soon as possible. "We hope that all sides in Myanmar can work hard with China to quieten down the situation and return the border as soon as possible to peace and tranquility so these border people can go home," she told a daily news briefing. The MNDAA was formerly part of the Communist Party of Burma, a powerful China-backed guerrilla force that battled the Myanmar government until the group splintered in 1989. Fighting between the rebels and the army in 2009 pushed tens of thousands of refugees into southwestern China, angering the government in Beijing.