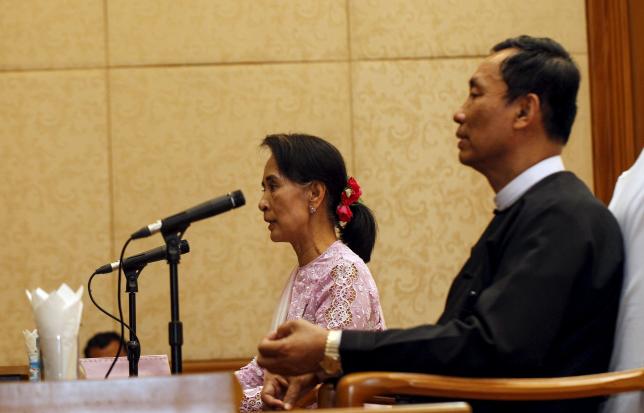 NAYPYITAW - The embattled speaker of Myanmar's parliament opened the lower house on Tuesday for what will likely be a fractious session, with ruling party factions facing each other for the first time since the president sacked him from a leadership post last week. President Thein Sein's purge of Shwe Mann and his allies from the ruling Union Solidarity and Development Party (USDP) leadership marked the biggest shake-up in the political establishment since a junta stepped aside in 2011, ending 49 years of military rule. On Monday, Shwe Mann met opposition leader Aung San Suu Kyi as the country's leaders manoeuvred ahead of the showdown in parliament. On her way into parliament on Tuesday, Suu Kyi declined to comment on Shwe Mann or what they discussed. "We will carry on as usual," she said, when asked what she planned for the parliamentary session. "The internal affairs of the USDP should only be party affairs. We will take action if anything interferes with parliament." Shwe Mann's relationship with Suu Kyi was regarded with suspicion by some members of the USDP, which is mostly made up of former military officers, and was one of the motives for his sacking as party chairman. Shwe Mann still holds the powerful position of speaker in the lower house, a duty he took up again as the session opened in Naypyitaw, the new capital built in secrecy by the former military government. It is the final session before a general election on Nov. 8, seen as a crucial test of the country's democratic reforms. He is under pressure from the country's election commission to table an impeachment bill on Tuesday that could be used to unseat him and may be supported by the president's faction. RIVAL FACTIONS Shwe Mann's allies vowed to defend him in parliament. "Most of the USDP lawmakers in the lower house are going to support Shwe Mann," said Aung Lynn Hlaing, a USDP member of parliament, on his way into parliament. "Shwe Mann always represents us when we are ignored by the president. I think it's not right the way they did what they did in our party." Shwe Mann was removed in a late-night meeting hosted by presidential allies after security forces locked down the party headquarters. The move came just a day before the submission deadline for party candidate lists for the election, billed as the country's first free and fair vote in 25 years. Tension between the two rivals rose after the USDP last week omitted from its list the majority of a group of around 150 officers who retired from military service to run as USDP candidates. The USDP also sidelined two of the president's closest allies by leaving them off the candidate list. They were Soe Thein, a powerful minister of the president's office, and Aung Min, who was picked by Thein Sein to lead the government's efforts to forge a peace agreement with the country's armed ethnic groups. Shwe Mann's fall from grace bears echoes of the political purges under the junta, leading some to doubt Shwe Mann has a future in public life. "We can be sure they will uproot him by hook or by crook," said Thein Nyint, a member of the parliament from the New National Democracy Party (NNDP). "So my best advice for him is 'resign from the speaker's position if you want to prevent further perils for you and your family'." -Reuters