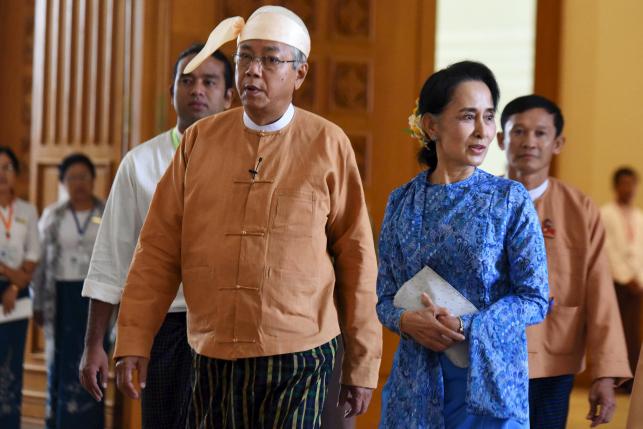 NAYPYITAW/YANGON – Myanmar's upper house of parliament approved a bill on Friday that gives Aung San Suu Kyi a powerful government role, despite opposition from the military on the second day of her party's new administration. The bill creates the post of state counselor and would allow the Nobel laureate to coordinate ministers and influence the executive. It would help Suu Kyi circumvent a constitution written under the former junta that prevents her leading the country because her two sons are not Myanmar citizens. Suu Kyi, who spent years under house arrest because of her push for democracy, has described those constitutional provisions as "silly" and said she would rule regardless after she led her National League for Democracy (NLD) to a landslide election victory in November. Members of parliament from the military - who under the constitution hold a quarter of seats - opposed the NLD bill, describing it as unconstitutional. They said the state counselor position concentrated too much power in the hands of one person and lacked checks and balances. "The provisions in the bill are tantamount to meaning the state counselor is equal to the president, which is contrary to the constitution," said Colonel Myint Swe, a military member of the upper house. Some lawmakers suggested the Constitutional Tribunal should decide on the bill. Despite military resistance, the bill passed and moved to the lower house for debate on Monday. The NLD has a majority in both houses so does not need military approval to pass bills. Suu Kyi's party would need military approval to change the constitution: amendments require support of more than 75 percent of lawmakers. 'CONFRONTATIONS' The constitution is the main bone of contention between Suu Kyi and the military, whose commander-in-chief, Min Aung Hlaing, on Sunday stressed the need for the armed forces to remain a force in politics and warned against amending the charter quickly. Some NLD lawmakers said the tussle over the state counselor post would be the first of many between the military members of parliament and the government that took office on Wednesday. "There will be confrontations between the NLD and military MPs in future," said Thiri Yadana, an upper house NLD lawmaker. "They have to agree to amend the constitution." The role of state counselor will add to the list of Suu Kyi's jobs - she is already foreign minister, education minister, energy minister, and minister of the president's office - and has renewed questions about her willingness to delegate power. "It will be extremely hard to carry out these roles," said Richard Horsey, an independent political analyst in Yangon. "The sheer number of people that will want to meet with her will be difficult to manage." She has a thin bench of experienced politicians. Her party fought for democracy for more than quarter of a century, but its members are novices in government. NLD official Win Htein said Suu Kyi's roles would not be a burden and the counselor position would allow her to "work more effectively". The energy portfolio gives Suu Kyi oversight of oil and gas production, as well as responsibility for a decision on the $3.6 billion Myitsone Dam project, suspended in 2011. China has invested heavily in it and is keen to see it proceed. –Reuters