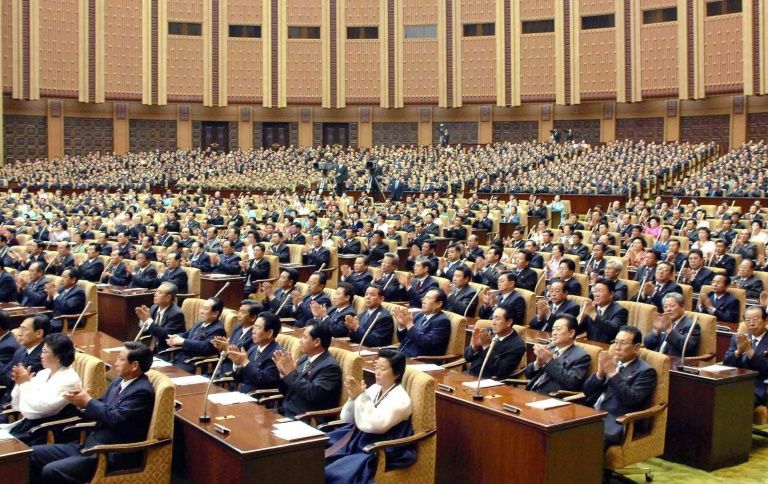 SEOUL (AFP) - North Korea's rubber-stamp parliament will hold an annual session next month, state media said Thursday, with all eyes on whether it will move to bolster a diplomatic thaw with the US and South Korea.

A rapid rapprochement that kicked off during last month's Winter Olympics has seen US President Donald Trump agree to hold a summit with the North's leader Kim Jong Un.

The hermit state's legislative body meets only once or twice a year, mostly for day-long sessions to approve budgets and other routine business of the ruling Workers' Party.

However, it occasionally announces major news: a session in 2012 approved a revision of the constitution to formally declare the country a nuclear state.

"The sixth session of the 13th Supreme People's Assembly of the Democratic People's Republic of Korea will be convened in Pyongyang on April 11," the official KCNA news agency said.

It gave no other details, including the session's agenda.

But Cheong Seong-Chang from the Sejong Institute think tank said the session may involve a reshuffle of top officials as Kim steps up a push to ease the nuclear-armed regime's international isolation.

Kim Yong Nam, the nation's ceremonial head of state who made a rare visit to the South last month to attend the Winter Games, may be one of the senior cadres to step aside, Cheong said.

"At this time when Kim Jong Un comes forward himself to hold summits with the South and the US... the North's leadership may think that the presidium president needs to take more proactive role in diplomacy," he said.

The frail 90-year-old head of state may be replaced by the current foreign minister Ri Yong Ho, who has played an active role in the current flurry of diplomacy including talks in Sweden last weekend, Cheong said.

"The latest session will further accelerate generational changes in the leadership of the North's government and strengthen Kim's grip on power."

Kim Jong Un's recent proposals to hold two summits -- North-South talks followed by a face-to-face meet with Trump -- were relayed by Seoul's envoys who met with the North's leader this month.

But other than a commentary in state media earlier this week in which it denied sanctions were pushing it to the negotiating table, Pyongyang has made no public pronouncements on the apparent rapprochement, raising concern over its intentions.

To prepare for the planned inter-Korea summit, Seoul has proposed high-level talks with the North at the border truce village of Panmunjom on March 29.

Seoul is also sending a troupe of K-pop performers to Pyongyang for a four-day visit, officials have said, to stage the first performances by South Korean acts in the North since 2007.

And the South and the US have announced a plan to resume annual joint military exercises on April 1, with its main drill shortened by a month -- in an apparent conciliatory gesture over an event that infuriates the North.