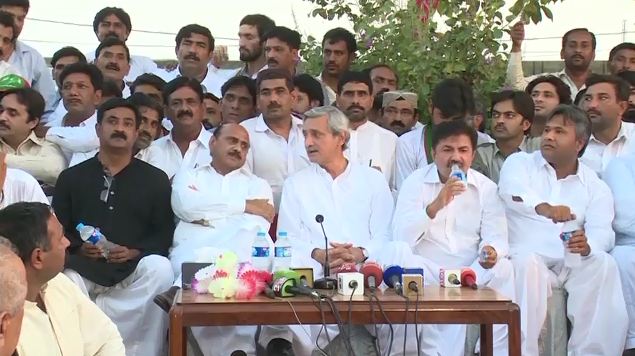 LODHRAN (92 News) – In yet another political setback for Pakistan Muslim League-Nawaz, the PML-N’s former MNAs, MPA and ticket holders have announced to support Pakistan Tehreek-e-Insaf candidate Jahangir Tareen for NA-154 by-elections. As the PML-N’s important leader and former member National Assembly Akhtar Khan Kanju’s resentment with the party leadership increased after which he along with other PML-N’s angry leaders have announced to support PTI’s Jahangir Tareen in by-polls. Akhtar Khan Kanju said that he will play an important role in defeating his party’s (PML-N) candidate and victory of PTI’s Jahangir Tareen. Pakistan Tehreek-e-Insaf leader and candidate for NA-154 by-polls Jahangir Tareen has welcomed all the angry leaders of PML-N and declared their support a milestone for his victory. The angry leaders said that the party leadership has continuously ignored them after which they decided to support Jahangir Tareen unconditionally.