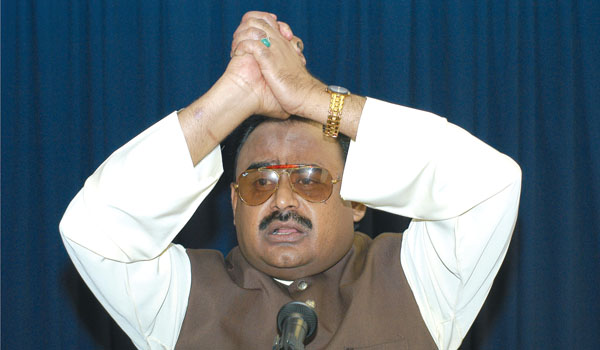 LONDON/KARACHI (92 News) – Muttahida Qaumi Movement (MQM) Chief Altaf Hussain has offered to the Pakistan Tehreek-e-Insaaf (PTI) to hold their rally planned on April 23 at Jinnah ground. In a statement issued from London, the MQM chief said that the PTI is welcome to hold their rally anywhere in the city, including Jinnah ground. However, he has asked the participants and organisers to respect the sanctity of the Yadgar-e-Shuhda. "We want a peaceful, free and fair election," he said. "Should the PTI decide to hold the rally anywhere else in the city, all sorts of cooperation will be made sure." Earlier, a scuffle broke out between MQM and the PTI workers at the Jinnah ground on Tuesday when Imran Ismail, a PTI candidate in the NA-246 by-poll, visited the site which the PTI has set for its April 19 rally. The PTI candidate said that he and his party members had gone to Jinnah Ground to make arrangements for the rally when the MQM goons attacked them. "Several PTI workers have been injured in the attack,” he added.