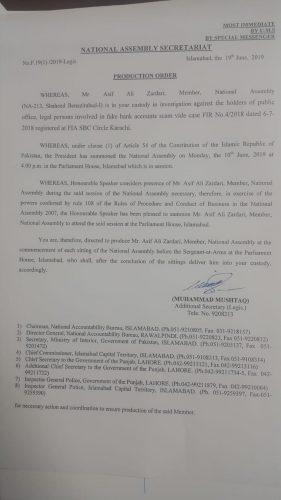 Earlier on Wednesday, Pakistan Peoples’ Party (PPP) chairman Bilawal Bhutto Zardari raised his voice for not issuing the production orders of former president Asif Ali Zardari and other lawmakers. Addressing on the floor of the House, the PPP chairman demanded National Assembly Speaker Asad Qaiser to issue production order of Zardari so that he can also participate in the parliament proceedings. Bilawal while urging the NA speaker to issue production orders for Zardari including four MNAs, how can they deprive these areas in the budget session? “What’s going on today, this is humiliating the democracy and National Assembly,” he termed. “Zardari remained President of Pakistan and remained in jail for 11 long years, but no charge against him was proven,” he added. On the other hand, earlier today, Bilawal took his Twitter and appreciated Muttahida Qaumi Movement (MQM) for speaking up for democratic constitutional right regardless of political differences. He said that MQM had demanded to issue production order of former president Asif Ali Zardari on the floor of National Assembly on Tuesday.

On June 17, Opposition Leader in the National Assembly Shehbaz Sharif has demanded National Assembly Speaker Asad Qaisar issue the production orders for PPP co-chairman Asif Zardari and PML-N’s Khawaja Saad Raifique. Shehbaz Sharif said that it was the budget session and each member should represent his constituency. He insisted on the issuance of the productions orders instead of starting discussion on the budget. Shehbaz Sharif said that PM Imran Khan is the biggest lie of the history. “The liar prime minister addressed the nation at night and hurled threats to the opposition.” The opposition leader said that there is no room for a lie in the Riasat-e-Madina. He said that the PML-N government rendered four services despite sit-ins. “We ended loadshedding and brought progress to 5.8 percent and inflation at 3 percent,” he said. The NA speaker said that it was responsibility of the government and the opposition to run the House. PPP leader Raja Pervaiz Ashraf also demanded the issuance of the production orders of both detained leaders. “The speaker has to issue the production orders under rules and regulations.” He termed the speaker’s attitude as partial. The speaker adjourned the session till Tuesday due to the hullabaloo in the House by the treasury benches.