ISLAMABAD (92 News) – An accountability court on Wednesday granted three-day transit remand of Sindh Assembly Speaker Agha Siraj Durrani. According to the reports, the NAB Karachi team arrested Agha Siraj Durrani from Islamabad and shifted to the Rawalpindi NAB office. After some hour, the SIndh Assembly speaker was presented to the accountability court where the court granted three-day transit remand. During the hearing, the NAB requested to grant seven-day transit remand; however, Accountability Court Judge Muhammad Bashir granted three-day transit remand and said that the accused will be presented in Karachi within three days. It was also reported that the Pakistan Peoples’ Party (PPP) leader was taken into custody from a five-star hotel in Islamabad. Durrani has been arrested in a case pertaining to owning assets beyond his known sources of income. Last year, NAB had initiated three separate inquiries against Durrani over funds embezzlement and disproportionate assets charge. The anti-graft watchdog had summoned the speaker several times to appear before the anti-graft watchdog body for interrogation in the case, however, Durrani failed to comply with the order which led to his arrest by NAB today. On July 20 last year, the anti-corruption body had ordered an inquiry on charges of corruption against the Sindh Assembly speaker. 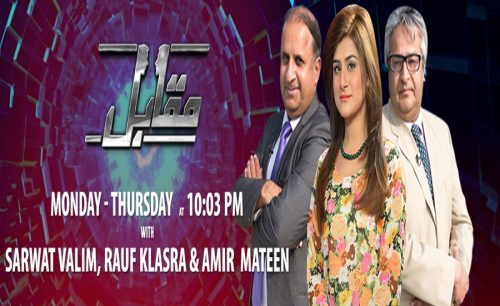 92 News channel break the current arrest of Agha Siraj Durrani related news yesterday in the famous program of Muqabil. Senior analyst Amir Mateen informed the audience in program of Muqabil with Rauf Klasra that there were going to be major arrests within Sindh and the main arrest will be held in the next 24 hours.

A day earlier, the Supreme Court of Pakistan rejected the review petitions of former president Asif Zardari and Faryal Talpur. A three-member bench headed by Chief Justice of Pakistan (CJP) Asif Saeed Khosa and comprising Justice Faisal Arab and Justice Ijazul Ahsan heard the case. The court announced the brief verdict after a four-hour hearing and rejected the applications of Omni Group, Abdul Ghani Majeed and Anwar Majeed. Chief Justice Asif Saeed Khosa remarked that 99.9 percent arguments are based on fears. However, the court allowed PPP chairman Bilawal Bhutto to file a review petition. In the petition, apart from seeking a halt to the investigation, the court was requested to transfer the case to Sindh. Meanwhile, Zardari, who is in Islamabad in connection with the fake accounts case, on Monday held a consultation meeting with his legal team comprising Farooq H Naik and Nayyar Bukhari at the Zardari House. On the other hand, the apex court also has to hear many important cases including the case pertaining to excessive payments made to independent power producers (IPP) by the government.