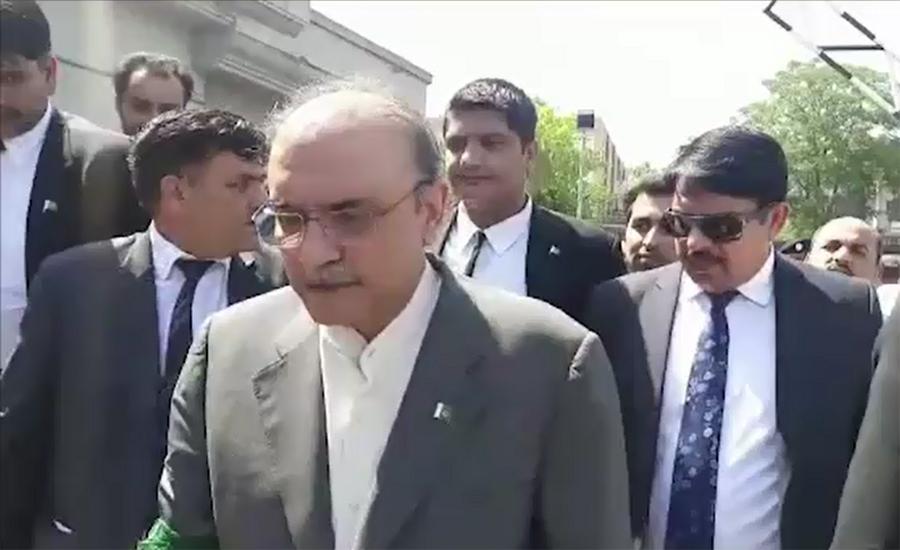 ISLAMABAD (92 News) – The National Accountability Bureau (NAB) on Friday presented former president Asif Ali Zardari before an accountability court in fake bank accounts case. During the case, the defence lawyers objected not to proved copies of the references. The court expressed anger on the Nab and ordered to provide the copies on same day. A NAB team brought the PPP co-chairman to the Judicial Complex amid tight security. Accountability Judge Muhammad Arshad Malik heard the case. Other accused persons are also in attendance in the court except the former president’s sister Faryal Talpur. She through her counsel Farooq H Naek filed an application seeking exemption from personal appearance in today’s hearing. It is noteworthy that the anti-corruption watchdog had issued arrest warrant for Faryal Talpur yesterday. A day earlier, the NAB issued arrest warrants of Faryal Talpur, sister of former president Asif Ali Zardari. According to the details garnered, the arrest warrants had been handed over to the NAB Rawalpindi chapter after approval by Chairman Justice (rtd) Javed Iqbal. Following the directions, NAB Rawalpindi formed a team to arrest the Pakistan People s Party (PPP) senior leader. Some officers of district administration and local police also reached Zardari House in Islamabad. It was reported that the corruption watchdog body authorities were attempting to trace the whereabouts of Talpur in order to arrest her. A special team of NAB intelligence officers has also been assigned the task to trace and arrest Faryal Talpur. The NAB had taken Zardari in its custody from his residence in the federal capital. He was taken to the NAB Rawalpindi office.
On June 10, the NAB arrested Pakistan Peoples’ Party (PPP) co-chairman Asif Ali Zardari from his Islamabad residence after the Islamabad High Court’s (IHC) rejected his pre-arrest bail plea in the money laundering case. Talpur, however, cannot be arrested as her warrants have not been issued.

A number of party workers and Zardari’s children Bilawal and Aseefa saw him off as the former president was driven away in a black Landcruiser. The emotional scene has also been seen when Zardari hugs and kisses with her daughter Aseefa Zaradri. After sitting in the NAB’s vehicle, Bilawal Bhutto also gave kiss on the face of Zardari and see off him. The PPP co-chairman was shifted to the NAB Rawalpindi office. The arrest comes hours after the Islamabad High Court rejected an application seeking extension in the pre-arrest bails of Zardari and his sister Faryal Talpur in the fake accounts case. Police personnel, including female officials, had entered the former president’s house after the court decision. All roads leading to the residence were blocked by police. Earlier, a team of the NAB reached Asif Ali Zardari’s Islamabad residence to arrest the leader after the Islamabad High Court’s (IHC) rejected his pre-arrest bail. The accountability watchdog has constituted two teams for the arrest of the former president. One team has been dispatched to Parliament House and another to Zardari House in Islamabad. A two-member bench that had earlier reserved its verdict on their application announced the verbal order. Both Zardari and his sibling had left the court building before the verdict was announced. The NAB can now act on its arrest warrants against Zardari, which were apparently issued yesterday, after receiving the written court order, which is expected to be issued soon. Talpur, however, cannot be arrested as her warrants have not been issued as yet. Zardari and Talpur have the option of appealing the IHC judgment in the Supreme Court.