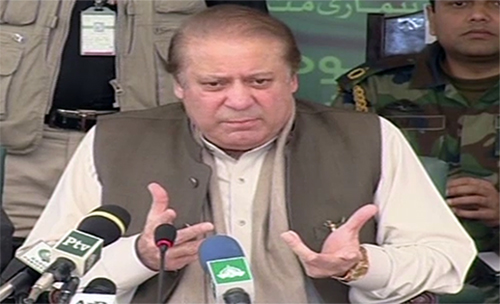 Addressing Pakistan Muslim League-Nawaz (PML-N) workers in Bahawalpur on Tuesday, Nawaz Sharif said that the NAB should do its job properly, adding that threatening people is not a good thing.

He said the National Accountability Bureau needs to take up cases only after thorough initial investigation and said no one should be harassed, without verification and solid proofs. He said he would also take up the issue with the Chairman NAB and said if any person was unduly persecuted, the government would take action.

Nawaz Sharif said that the country is facing many challenges including terrorism and energy crisis, adding that the government is trying its best to provide basic facilities to the masses. “Government is fully aware about the problems specially energy crises being faced by the masses,” he said.

The Prime Minister expressed his firm resolve to overcome the energy problem during the tenure of his government. “Work on three projects for production of electricity through gas is in progress which will produce three thousand and six hundred megawatts electricity after completion by next year,” he said.