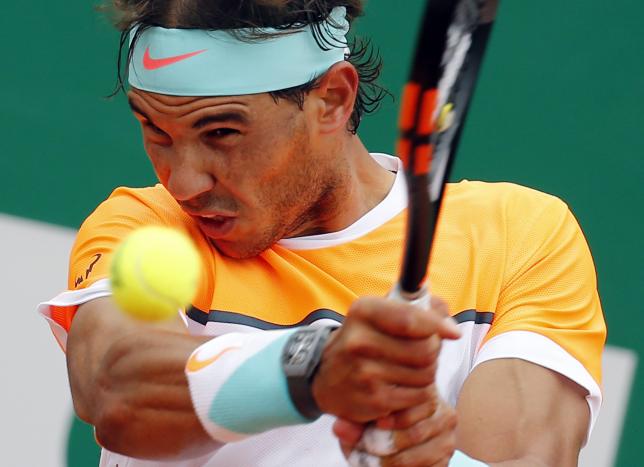 MONTE CARLO - Rafael Nadal returned to one of his favourite hunting grounds to thrash Frenchman Lucas Pouille at the Monte Carlo Masters on Wednesday as his build-up to the French Open began. The Spaniard, who will be looking for a 10th Roland Garros title next month, enjoyed a 6-2, 6-1 second-round victory. The world number five, who has ruled in Monte Carlo a record eight times, will next face either American 15th seed John Isner or Serbian Viktor Troicki in the third round. Nadal, who has struggled for his best form so far this year after battling a wrist injury and appendicitis last year, was totally dominant, converted four of his seven break points and won 75 percent of his service points. “I don't know how many unforced errors I made during the whole match, but for sure almost none,” said Nadal. “I played with the right mentality, the right concentration. I didn't make consecutive mistakes. That's something that happened the last couple months with me.” He is bidding for his second claycourt title of the year after claiming the trophy in Buenos Aires and trying to reclaim the Monte Carlo crown after Novak Djokovic and Stanislas Wawrinka won the last two editions. He was joined in the last 16 by second seed Roger Federer after the Swiss also enjoyed an easy 6-2, 6-1 victory over another Frenchman Jeremy Chardy. Federer next faces either France's Gael Monfils or Ukraine's Alexandr Dolgopolov. Seventh seed Wawrinka of Switzerland set up a third-round meeting with Bulgarian ninth seed Grigor Dimitrov after seeing off Argentine Juan Monaco 6-4, 6-1. World number one Novak Djokovic reached the third round on Tuesday when he easily beat Albert Ramos-Vinolas. -  Reuters