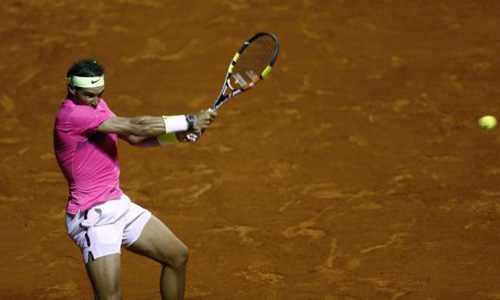 AIRES (Reuters) - Rafael Nadal, working his way back to top form after wrist problems last year, screamed with delight on reaching the Argentine Open semi-finals with a 6-1 6-1 rout of Federico Delbonis on Friday. Nadal, who went down to a first defeat in 53 consecutive semi-finals on clay at the Rio Open last weekend, pumped his fist after winning a superb rally in the fifth game of the second set and again when the Argentine hit the ball wide on second match point. "It was very important for me to reach the semi-finals here in Argentina," said Nadal, who overwhelmed Delbonis in an impressive battering lasting one hour and four minutes. "Now the next step is to reach the final to improve on ... Rio de Janeiro last week and I hope to do it," he added in a courtside interview after the quarter-final at the Buenos Aires Lawn Tennis Club. The Spaniard, who dropped to world number four with his loss to Italian Fabio Fognini in Rio de Janeiro, meets Argentine Carlos Berlocq in Saturday's second semi-final with a 65th title and Guillermo Vilas's record of 46 claycourt crowns in his sights. Juan Monaco, tournament winner in 2007, faces 2011 champion Nicolas Almagro in the other Argentine-Spanish semi-final.