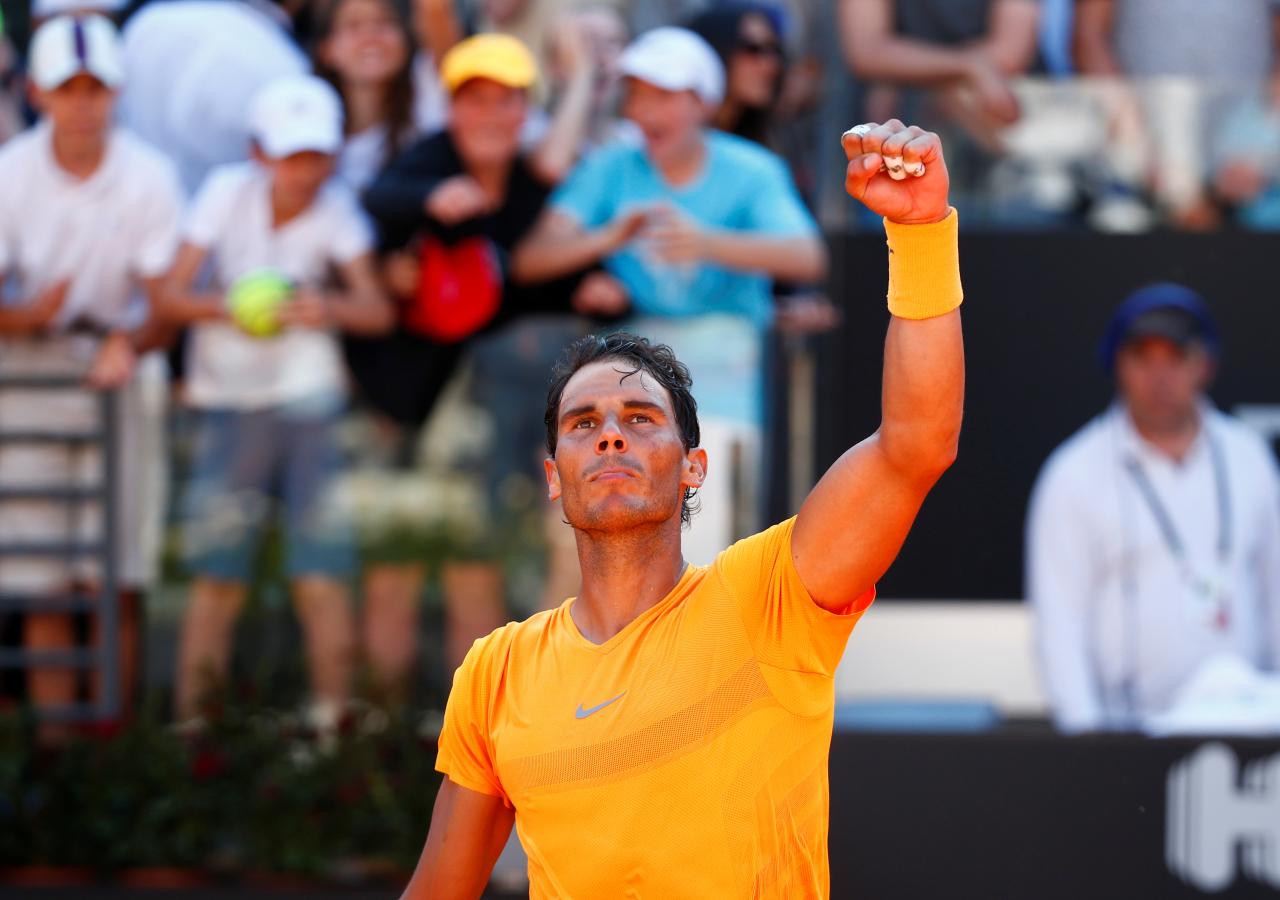 ROME (Reuters) - A rampant Rafa Nadal turned on the style to beat his old rival Novak Djokovic 7-6(4) 6-3 and reach his first Italian Open final since 2014. The top-seeded Spaniard will face defending champion Alexander Zverev who overcame fourth seed Marin Cilic of Croatia 7-6(13) 7-5 in the other semi-final. The 21-year-old German, who won the Madrid Open last week, is the in-form player on the ATP Tour going into the French Open, chalking up his 13th win in a row to reach Sunday’s final. Nadal’s clash with Djokovic, an open-era record 51st meeting between the two, was a thriller, with former world number one Djokovic producing his best performance since returning from a long-term elbow injury. “Playing against him is always a big challenge,” Nadal said. “He played well, and it’s always the same against him. When you go down a little bit in level, he’s always there and you are in big trouble.” Djokovic made the stronger start as Nadal struggled to get his first serves in, the Spaniard coughing up two break points in the opening game which his opponent squandered. Nadal soon pounced however, breaking Djokovic to go 4-2 up before the Serb rode his forehand to a stunning recovery. Djokovic, a four-times champion in Rome, was helped by a fortunate touch off the net cord that gave him two break points, and he converted for 5-4 before holding serve to draw level. Nadal started the tiebreak as he began the match, a poor forehand volley handing Djokovic the initiative, but the Spaniard won the next two points on his opponent’s serve to retake control. Djokovic clawed back to 3-3 but cracked after an unlucky touch off the tape put Nadal 6-4 up and the Spaniard wrapped up the set in 71 minutes. Nadal carried his momentum into the second set, winning 10 of 11 points in a blur of vicious swerving forehands and clubbed backhands that brought him an early break and a 2-1 lead in the decider. Djokovic still showed an appetite to fight back, forcing Nadal to three deuces in the eighth game of the second set before the Spaniard carved out a hold. That failure ended the Serb’s resistance and Nadal won in style on his opponent’s serve, striking a punishing forehand down the line to seal victory. Cilic proved a tough opponent for Zverev, going toe-to-toe with the youngster in a tiebreak lasting 20 minutes before the German ground down the wily 29-year-old to take the opener. Second seed Zverev was still buzzing from going in front and immediately paid a heavy price as Cilic pounced to grab an early break. But the German displayed nerves of steel, breaking the big-serving Croat to draw level before breaking him again to seal victory in just over two hours.