Nadal hopes to be ready for Miami despite ankle injury 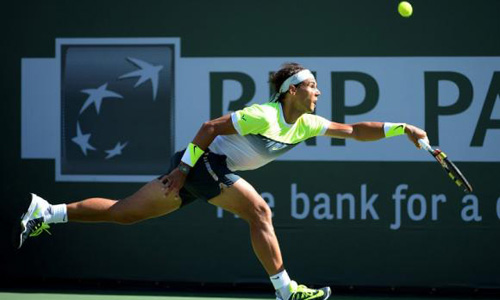 Nadal hopes to be ready for Miami despite ankle injury

MIAMI - Rafa Nadal is confident he will be ready to compete in this week’s Miami Open despite turning his ankle in practice, the second seeded Spaniard said on Tuesday. Nadal spent over an hour practicing on Tuesday and later admitted he was still in pain from twisting his ankle a day earlier but assured he would be on court on Friday for his opening match. “In the beginning I thought it was going to be the end of the tournament,” Nadal told reporters. “But I don’t know now, I don’t think so. I think I am going to be able to compete here. “Today, if I have to say one thing, for sure I am going to be on court on Friday. "Another thing is I don’t know how well I am going to be prepared...let’s see, if every day I am improving." Nadal will face the winner of the match between Ukrainian Sergiy Stakhovsky and fellow Spaniard Nicolas Almagro and the draw has thrown up a potential quarter-final clash against Czech Tomas Berdych. The world number three said he didn’t undergo a scan on his ankle as he was assured the injury was not that serious. “I visited the physio of the ATP, they see things like this every week and they said that it doesn’t look very bad," said Nadal. “It is still painful but I practiced here today for a little bit more than one hour. "It bothers me but I didn’t push myself very hard. I don’t know how I am going to answer when I try to get at 100 percent, which is what I need to compete well. "But I am confident I am going to be ready.” Nadal lost in the quarter-final at Indian Wells to Canada’s Milos Raonic but the 28-year-old said he felt his form was an upward curve as he begins his chase for a first Miami title. “Every week I am competing," offered and upbeat Nadal, who has 27 ATP World Tour Masters 1000 titles, more than any other player, but has never found the winner's circle in Miami despite reaching the final four times. "I am improving a little bit. That gives me confidence, positive feelings and positive energy”. - REUTERS