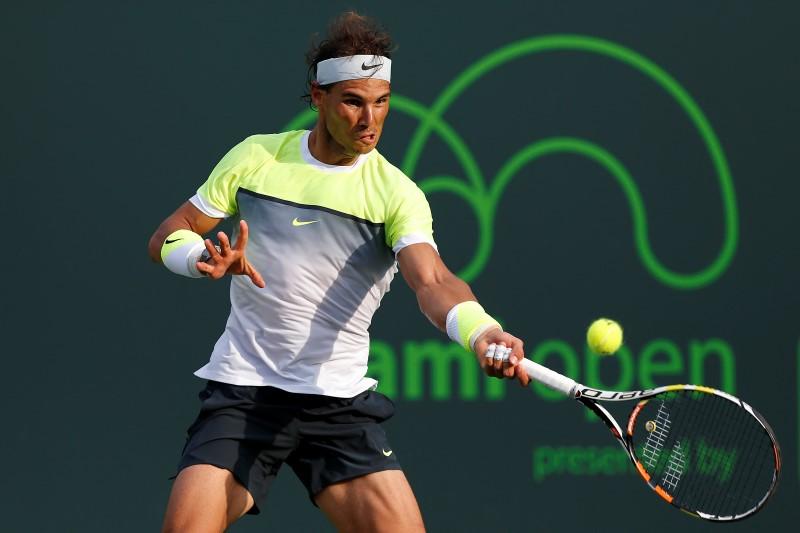 MIAMI - Rafa Nadal and Andy Murray got their Miami Open bids off to a solid start with straight sets victories at Key Biscayne on Friday. Nadal defeated fellow Spaniard Nicolas Almagro 6-4 6-2 in 89 minutes in windy conditions as he began his campaign to finally win the Miami tournament where he has lost in the final on three occasions. "In general I thought I played a solid match. I played well, I had good movement," said Nadal. "I had to put the balls in and play with no mistakes -- that was the idea with very tough conditions. Almagros was not an easy opponent." Murray had little trouble dealing with American Donald Young in his opening match with a 6-4 6-2 victory. Murray, a two-time winner at Key Biscyane, broke left-hander Young four times as he wrapped up the win in 82 minutes. The Scot will face Santiago Giraldo in the next round after the Colombian beat Robin Haase of the Netherlands 6-2 3-6 6-0. Murray is looking for his 10th Masters 1000 title and his third trophy in Miami, having won in 2009 and 2013. Key Biscayne is something of a ‘home court’ for Murray, who practices at the venue during his off-season preparation. “I spend hours, hundreds and hundreds of hours, practicing on that court," he said. "Each week, when I am here, I would practice 14 hours at least on that court. Over the last seven, eight years, I have spent a lot of time on it." South Korean teenager Chung Hyeon, who gained his first ATP World Tour win on Wednesday, was beaten by eighth seed Tomas Berdych, the Czech triumphing 6-3 6-4. Chung showed his promise again, however, gaining a 4-2 lead in a rain-interrupted second set before Berdych took control, winning the last four sets. Berdych will face the 25th-seeded Bernard Tomic, who edged American Austin Krajicek 7-6(6) 7-5. South African Kevin Anderson fought superbly to beat American Sam Querrey 6-7(5) 7-6(3) 6-4 in two hours and 32 minutes. Querrey served for the match at 6-5 in the second set, but could not close it out, and then dropped serve at the start of the third as Anderson fought back. World number one Novak Djokovic gets his campaign under way against Slovak Marin Klizan on Saturday. - Reuters