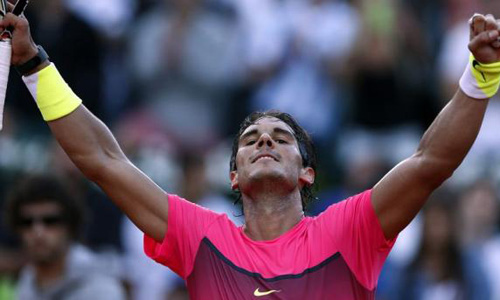 BUENOS AIRES (Reuters) - Rafael Nadal, pushed to the limit in a high octane first set, made up for his semi-final defeat at the Rio Open a week ago by reaching the Argentine Open final with a 7-6(7) 6-2 victory over Carlos Berlocq on Saturday. The world number four will meet a fourth Argentine in succession in the tournament, 2007 champion Juan Monaco, in Sunday’s showpiece match looking for a 65th career title and record-equalling 46th on clay. The first set, with 74th-ranked Berlocq playing every bit as well as his multi-titled opponent, went with serve before the Argentine ran up a 6-1 lead in the tiebreak. However, Nadal fought back, saving five consecutive set points and then one more to take it 9-7 on his first set point. “Evidently, when you recover five points (in a row) as well as playing well you have to have some luck, you can’t do it without luck. Carlos was playing bravely and serving well,” Nadal told reporters. “In the end I managed to be more dynamic and aggressive and place my shots well,” said top seed Nadal, who has been working on a comeback to his best form after right wrist problems during the second half of last year. NADAL WOBBLES The Spaniard wobbled early in the second set as he struggled with length on his drives but responded to having his serve being broken by breaking back for 2-2. Gradually gaining better length on his forehand, Nadal broke twice more on the way to comfortably taking the match, sealed when Berlocq hit a return long after an hour and 52 minutes. Monaco beat 2011 champion Nicolas Almagro 6-3 6-7(6) 6-4 in a first semi-final lasting just short of 2-1/2 hours. The 60th-ranked Monaco, who reached a career high number 10 in July 2012, failed to convert two match points in the second set before winning a dour baseline battle with an ace on his third. The 30-year-old Davis Cup veteran has begun to recover his best form just when he was overlooked for Argentina’s World Group first round tie at home to Brazil next weekend. “I’m happy for Juan (to reach the final) after he’d been having injury niggles and as a good friend I hope it goes well for him... and also for myself it’s a thrill to be in my first Buenos Aires final and my first of the year,” said Nadal.